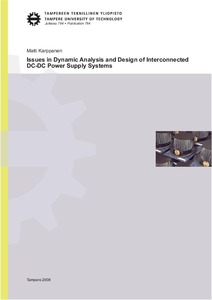 This thesis studies issues in dynamic analysis and design of interconnected DC-DC power supply systems. The history of the dynamic analysis dates back to the 1970s, when the modeling method for an individual switched-mode converter was introduced. Later on, the methods to analyze stability and performance of interconnected systems have been widely discussed in literature. However, a full understanding of many issues regarding the impedance interactions within the systems still seems to be missing. Therefore, the main objective of the thesis is to show that the minor-loop gain, which is commonly used in the interaction analysis, contains perfect information on the stability of the interconnected system but not necessarily much information on the robustness of the stability and the interactions taken place inside the converters. As a consequence of this, the second objective is to introduce techniques with which the interactions can be reduced or totally removed, thus making the dynamic analysis and design of the systems deterministic.

The thesis utilizes two-port networks and the concept of dynamic profile introduced recently in the analyses of converters. Comprehensive formalism is derived to analyze also the effect of output-voltage remote sensing on converter dynamics. Such formalism is not found in literature, although remote sensing is widely used to improve voltage regulation of a converter. The effect of source and load interactions on the converter dynamics are discussed by the general interaction formalisms and the minor-loop gains defined at the input and output of the converter.