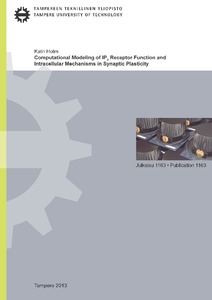 Learning and memory in the brain have been shown to involve complex molecular interactions. In the field of computational neuroscience, mathematical modeling and computer simulations are combined with laboratory experiments to better understand the dynamics of these interactions. A vast number of computational models related to intracellular molecular mechanisms calls for means to compare them to each other. In this thesis, computational models and methods for understanding specific molecular mechanisms in synaptic plasticity, a phenomenon involved in learning, are studied and compared both quantitatively and qualitatively. The focus is set on the IP3 receptor kinetics and the intracellular molecular mechanisms including processing of calcium ions in the postsynaptic neuron. Calcium has been shown to play an important role in different types of synaptic plasticity, only the mechanisms and dynamics for elevation of cytosolic calcium concentration vary. The IP3 receptor, an intracellular calcium releasing channel, is one of the major factors responsible for the calcium elevation in neurons.

Firstly, the applicability of deterministic and stochastic approaches in modeling the IP3 receptor kinetics, involving small number of molecules, is studied. In this case, the study shows that stochastic approach, especially Gillespie stochastic simulation algorithm, should be favored. Secondly, since a well-established model for IP3 receptor function in neurons is lacking, this thesis provides not only tools for model comparison but also an insight to which model of the tens of models to choose. Using stochastic simulations, four IP3 models are compared to experimental data to clarify how well they model the measured features in neurons. The results show that there are major differences in the statistical properties of the IP3 receptor models although the models have originally been developed to describe the same phenomenon. Thirdly, this study shows that the models for postsynaptic signaling in synaptic plasticity are becoming more sophisticated by involving stochastic properties, incorporating electrophysiolocial properties of the entire neuron, or having diffusion of signaling molecules. Computational comparison of these models reveals that when using the same input, models describing the phenomenon in the same neuron type produce different results.

One of the future goals of computational neuroscience is to find predictive computational models for biochemical and biophysical mechanisms of synaptic plasticity in different brain areas and cells of mammals. When describing a system of molecular events, the selection of modeling and simulation approach should be done carefully by keeping the properties of the modeled biological system in mind. Not only do theoreticians and modelers need to consider experimental findings, but the experimental progress could also be enhanced by using simulations to select the most promising experiments. As discussed in this thesis, attention paid to these issues should improve the utility of modeling approaches for investigating molecular mechanisms of synaptic plasticity. Only then is it possible to use the models to learn something new about the mammalian brain function.