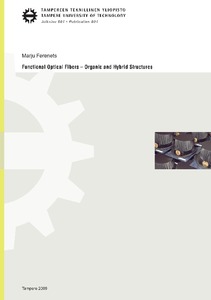 Constant need for saving space and energy has led to the miniaturization of electronic devices and to the integration of such devices into various unconventional substrates like different kind of fibers. It has been proposed and in some cases already demonstrated that electronic devices such as light emitting diodes, photovoltaic cells, thin film transistors could be deposited straightto the fibers. Traditional textile fibers do not offer sufficiently stable and smooth base forelectronic devices. Plastic optical fibers (POF) that are flexible and of small size are suitable candidates for functional fibers and can be easily incorporated into the textile structure. POF could also enable to use light as an information carrier instead of typical electrical signals and would provide interesting lighting solutions.

Such fibrous electronic devices however need new type of materials thats processing techniques would be compatible with cylindrical shape of the substrate and could be processable at temperatures suitable for plastic fibers. Inherently conductive polymers (ICPs) have opened the way to polymeric electronics thats driving force is the manufacturing of electronics at low cost on flexible substrates using solution processing methods such as printing or dip-coating. For some device components one has to still use inorganic materials that have nowadays been developed in a form compatible with plastic substrates and their processing conditions (e.g. indium tin oxide in a form of printing ink).

The aim of this thesis is to study possibilities to combine unique properties of POF and ICPs in a form of functional optical fibers. This goal is realized by first studying manufacturing methods of POF as a substrate of functional fibers. In the second step of the research two different ICPs—polypyrrole (PPy) and poly(3,4-ethylene dioxythiophene) (PEDOT)—are studied as components of possible electronic devices. PPy films in a planar and fiber form are studied for transparent electrode application. Film formation is successful, but the results suggest that such PPy films have insufficient electrical conductivity and environmental stability for any real electronic device applications.

PEDOT films are studied for ammonia sensor application in electrical and optical regime. It is demonstrated that PEDOT films can be used for detecting gaseous ammonia. Comparative study between the sensitivity of PEDOT: p-toluene sulfonate (PTS) and films made of commercially available aqueous dispersion of PEDOT:poly(styrene sulfonate) indicates that in situ polymerized PEDOT:PTS has better performance in sensor application due to its smaller counter-ion and larger surface area.

Finally, a photovoltaic fiber based on a dye sensitized solar cell technology is demonstrated. This type of fiber acts as a fibrous photo-detector, but the obtained results are poor (short circuit current at nA level). Low performance of the photovoltaic fiber originates from the poor quality of a TiO2 layer and from the low intensity of light penetrating into the dye sensitized solar cell structure.