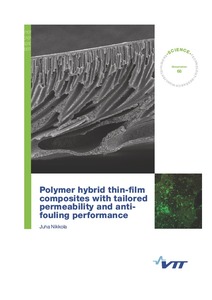 Composites and hybrid materials are new material combinations which can provide added value for existing products or create novel multifunctional properties. This thesis aimed at fabricating and modifying thin-film composites (TFC) by using various coating technologies. Moreover, the target was to tailor the permeability or to create anti-fouling performance. Inorganic, inorganic-organic and organic coating layers were made by atmospheric plasma deposition (APD), sol-gel (SG), atomic-layer-deposition (ALD) or polyvinyl alcohol (PVA) dispersion coating methods. Coatings were deposited using either roll-to-roll or batch process. APD method was used to create an inorganic silicon oxide (SiOx) coating layer on a low-density polyethylene (LDPE) coated board. In addition, atmospheric plasma was used for pre-treatment of LPDE surface prior SG coatings. The SiOx coatings did not show a significant improvement in barrier performance using the specific roll-to-roll process. Therefore, SG coating method was studied instead in order to form a barrier layer on LDPE-board by using the roll-to-roll process. SG coatings reduced the surface roughness and made the polymer surfaces either hydrophilic or hydrophobic. In addition, the coating chemistry had an effect on the oxygen and grease barrier performances. The highly cross-linked SG coating gave a better oxygen barrier performance, while the other SG coating revealed an enhancement in the grease barrier. Plasma activation of the LDPE surface enhanced the wettability and adhesion of both SG coatings. In addition, SG coating was applied on a polylactic acid (PLA) coated board. The SG coating created favourable, smooth and hydrophilic primer layer on PLA-board, which was further coated with an inorganic aluminium oxide (Al2O3) skin layer by using ALD. The particular TFC structure based on ALD and SG coatings gave a slightly better barrier performance compared to a plain ALD coating. PVA and ALD based antifouling coatings increased the hydrophilicity and surface polarity of the polyamide (PA) TFC membranes. All the coated membranes indicated an enhancement in bacteria-repellence. Indeed, the improvement in the bacterial anti-adhesion performance of coated membranes was due to an increase in surface polarity. The biocide-modified PVA coatings enhanced further the anti-fouling performance due to their antimicrobial activity. As expected, in comparison to the uncoated membrane, the PVA-coated membranes tend to increase the salt rejection and to reduce the water and salt permeability. However, the biocide-modified PVA coatings decreased the water permeability and showed also a minor decline on the salt rejection. The ALD coatings increased the water and salt permeability and furthermore, reduced the salt rejection.