An Energy-efficient Live Video Coding and Communication over Unreliable Channels 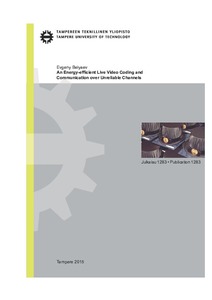 In the ﬁeld of multimedia communications there exist many important applications where live or real-time video data is captured by a camera, compressed and transmitted over the channel which can be very unreliable and, at the same time, computational resources or battery capacity of the transmission device are very limited. For example, such scenario holds for video transmission for space missions, vehicle-to-infrastructure video delivery, multimedia wireless sensor networks, wireless endoscopy, video coding on mobile phones, high deﬁnition wireless video surveillance and so on. Taking into account such restrictions, a development of eﬃcient video coding techniques for these applications is a challenging problem.

The most popular video compression standards, such as H.264/AVC, are based on the hybrid video coding concept, which is very eﬃcient when video encoding is performed oﬀ-line or non real-time and the pre-encoded video is played back. However, the high computational complexity of the encoding and the high sensitivity of the hybrid video bit stream to losses in the communication channel constitute a signiﬁcant barrier of using these standards for the applications mentioned above.

In this thesis, as an alternative to the standards, a video coding based on three-dimensional discrete wavelet transform (3-D DWT) is considered as a candidate to provide a good trade-oﬀ between encoding eﬃciency, computational complexity and robustness to channel losses. Eﬃcient tools are proposed to reduce the computational complexity of the 3-D DWT codec. These tools cover all levels of the codec’s development such as adaptive binary arithmetic coding, bit-plane entropy coding, wavelet transform, packet loss protection based on error-correction codes and bit rate control. These tools can be implemented as end-to-end solution and directly used in real-life scenarios. The thesis provides theoretical, simulation and real-world results which show that the proposed 3-D DWT codec can be more preferable than the standards for live video coding and communication over highly unreliable channels and or in systems where the video encoding computational complexity or power consumption plays a critical role.