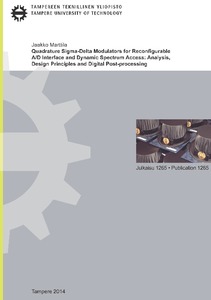 In the course of development of wireless communications and its modern applications, such as cloud technologies and increased consumption and sharing of multimedia, the radio spectrum has become increasingly congested. However, temporarily and spatially underused spectrum exists at the same time. For increasing the efficiency of spectrum usage, the concept of dynamic spectrum access (DSA) has been proposed. Ultimately, the DSA principle should be exploited also in cognitive radio (CR) receivers. Herein, this paradigm is approached from the receiver architecture point-of-view, considering software-defined radio (SDR) as a platform for the future DSA and CR devices. Particularly, an analog-to-digital converter (ADC) architecture exploiting quadrature ΣΔ modulator (QΣΔM) is studied in detail and proposed as a solution for the A/D interface, being identified as a performance bottleneck in SDRs.

By exploiting a complex valued noise transfer function (NTF) enabled by the QΣΔM, the quantization precision of the ADC can be efficiently and flexibly focused on the frequency channels and the signals to be received and detected. At the same time, with a traditional non-noise-shaping ADC, the precision is distributed equally for the whole digitized frequency band containing also noninteresting signals. With a single QΣΔM, it is also possible to design a multiband NTF, allowing reception of multiple noncontiguous frequency channels without parallel receiver chains. Furthermore, with the help of digital control, the QΣΔM response can be reconfigured during operation. These capabilities ﬁt in especially well with the above mentioned DSA and CR schemes, where the temporarily and spatially available channels might be scattered in frequency.

From the implementation point-of-view, the effects of inherent implementation inaccuracies in the QΣΔM design need to be thoroughly understood. In this thesis, novel closed-form matrix-algebraic expressions are presented for analyzing the transfer functions of a general multistage QΣΔM with arbitrary number of arbitrary-order stages. Altogether, the signal response of an I/Q mismatched QΣΔM has four components. These are the NTF, an image noise transfer function, a signal transfer function (STF) and an image signal transfer function. The image transfer functions are provoked by the I/Q mismatches and deﬁne the frequency proﬁle of the generated mirror-frequency interference (MFI), potentially deteriorating the quality of the received signal. This contribution of the thesis increases the understanding of different QΣΔM structures and allows the designers to study the effects of the implementation inaccuracies in closed form.

In order to mitigate the MFI and improve the signal reception, a mirror-frequency rejecting STF design is proposed herein. This design is found to be effective against I/Q mismatches taking place in the feedback branches of the QΣΔM. This is shown with help of the closed-form analysis and confirmed with computer simulations on realistic reception scenarios.

When a mismatch location independent MFI suppression is the desired option, it is a logical choice to do this processing in a digital domain, after the whole analog receiver front-end. However, this sets demands for the information to be digitized, i.e., the source of the MFI should be available also in the digital domain. For this purpose, a novel multiband transfer function design is proposed herein. In addition, a QΣΔM specific digital MFI compensation algorithm is developed. The compensation performance is illustrated in practical single- and multiband reception scenarios, considering desired signal bandwidths up to 20 MHz. In the multiband scenario, allowing reception and detection of noncontiguous frequency channels with a single receiver chain, the digital compensation processing is done sub-bandwise, securing reliable functionality also under strongly frequency-selective interference. In the applied single- and multistage QΣΔM architectures, the I/Q mismatches are considered in all the QΣΔM branches as well as in the preceding receiver front-end, modeling the challenging and realistic scenario where the whole receiver chain includes cascaded in-phase/quadrature (I/Q) mismatch sources.

As a whole, developing digital MFI compensation is a significant step towards practical receiver implementations with QΣΔM ADCs. In consequence, this allows the exploitation of the multiband and reconfigurability properties. The proposed design can be implemented without additional analog components and is straightforwardly reconfigurable in dynamic signal conditions typical for DSA and CR systems, e.g., in case of frequency hand-oﬀ because of a primary user appearance. In addition, the digital post-compensation of the MFI eases the strict demands for the matching of the analog circuits in SDRs.