Multi-content revelation through dialogue processes: a study in understanding the hermeneutic primary task of small groups in the context of Finland and India 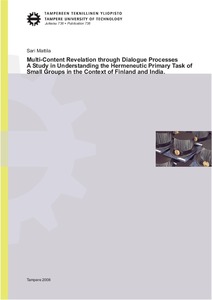 This is a data informed, multidisciplinary and phenomenological Study of hermeneutic processes where the empirical context concerns task groups engaged with international border crossings. The Study of dialogue praxis in such task groups reveals processes that deepen the understanding of issues arising in cross-border situations. Cross-border phenomena cannot be well understood without understanding embeddedness of groups and organisations, and how unconscious wishes, pictures-in-the-mind and authority delegation function within and across boundaries. The Study notes that interactions in task groups are more complex and have more dimensions than usually indicated and conceptualised in the literature.

Task groups and group relations knowing to unravel dialogical phenomena are studied using the framework of four primary tasks, which are present in every organisation, to understand and unravel what facilitates and impedes them in cross-border contexts. These primary tasks, into which all tasks enmesh, the normative, the existential, the phenomenal, and the hermeneutic, cover diverse issues in organisational and group evolution and functioning. Important capabilities of a system can be lost, if simultaneity in engaging with primary tasks is disrupted. Therefore, instituting an explicit hermeneutic primary task to inquire, raise working hypotheses, question prevailing rationalities and action modalities can enable organisations and groups within them to learn and know more about their own functioning. Since engagement with hermeneutic primary task enables other primary tasks and organisational goals anchored in its purposes to be kept in mind, its importance for understanding, voicing and formulating strategy is significant. Process observations with respect to the five boundaries of space, time, technology, task, and sentience disclosed various challenges for task groups originating in the two territories, Finland and India, scoped in this Study.

For unravelling group phenomena, this Study used action research methodology with an emphasis on reality testing. By raising working hypotheses, which can be seen as ongoing tentative formulations of what was happening in the here-and-now, feedback loops were established. This methodology gave opportunities for all participating, including the researcher, to reflect on processes and learn from feedback. The aim was to study the exploring and inquiring. Such approaches are found to be of use when mere data will not suffice, and group members need to establish ongoing hermeneutic circles and spirals to learn to interpret processes, functions and phenomena, that are new or strange and outside everyday experiences. To do this, the unit of analysis chosen was the group.

With a view to explore and interpret dimensions of thinking, feeling and acting, four studies in case form were tracked, two in India and two in Finland. These case studies illuminated struggles when thinking, feeling and acting enmesh as discovered through observations, shared insights and expressions of unthought knowns. Through these cases, problem issues within the groups were tracked and also what these issues highlighted for further understanding and exploration. This knowing put into working hypotheses was discussed and found useful in facilitating deeper insight processes.

This Study revealed efficacy of exploration in dialogical spaces when ambiguity is high. The design of desired cross-border collaborations can be improved through exploration in groups and between groups in forms of collaborative endeavours. The Study finds that rational approaches alone do not suffice in unanalysable environments where there is little or no previous experience or knowledge to undertake analysis through pre-set or known issues or familiar logic. Thinking and theorising for concept development from praxis is a useful supplement to analysis to expand the scope of inquiries by including experiential learning.

The Study concludes that experiential learning in task groups through interpretation of ongoing processes can expand and enrich a group’s hermeneutic endeavours for concept development from praxis. Such hermeneutic endeavours can transform a group’s own ways of thinking, feeling and action for improved task effectiveness. One such way for any task group is to explicitly institute a Hermeneutic Primary Task alongside acknowledgement of Normative, Existential and Phenomenal ones.