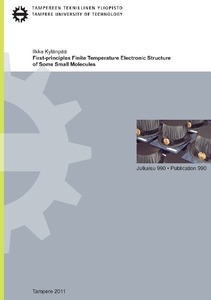 The work presented in this thesis is based on the Feynman path integral formalism for quantum statistics. This brings forth a novel approach to solve quantum many-body systems giving complementary knowledge to more conventional approaches. In practice, the multidimensional path integrals are evaluated with Monte Carlo methods, and hence, the approach is called path integral Monte Carlo (PIMC).

The PIMC method has not gained the deserved popularity, yet, even though this finite temperature approach yields exact quantum statistics. In practice, the PIMC method faces challenges deriving from its computational labour and the proper treatment of antisymmetric density matrix in case of identical fermions, that is,the fermi statistics. Also, the singularity of the Coulomb potential sets challenges for the most direct application of the path integrals.

In this thesis we concentrate on the finite temperature quantum chemistry of some small molecules using the path integral Monte Carlo method. First, we give a brief introduction to the basics of the path integral formalism and its application using the Metropolis Monte Carlo algorithm. Second, we show how to overcome the problems related to the Coulomb singularity. Third, a brief survey on path integrals for fermions is carried out. Finally, we present the results from the four papers, which are included in this thesis and have been published in the refereed journals of the American Institute of Physics and the American Physical Society.

In Paper I, a three-body quantum system, hydrogen molecule ion H2+, is revisited, once again. There we aim at tracing the electron-nuclei coupling effects in the three-body all-quantum, i.e. nonadiabatic, molecule. Among others we have evaluated spectroscopic constants and molecular deformation, also considering the isotope effects. Distinct features of coupling are found for the nuclei.

In Paper II, we have found and explained the surprising thermal instability of the dipositronium molecule, Ps2. A proper nonadiabatic treatment is necessary for the dipositronium, thus making it challenging for conventional methods of quantum chemistry. In addition, with the PIMC method the present strong correlations are described properly.

In Paper III, the quantum statistics of the five-particle molecule, H3+ ion, is examined. There we show how contributions from quantum and thermal dynamics to the particle distributions and correlation functions can be sorted out, and furthermore, how the quantum to classical dynamics transition can be monitored. At low temperatures the necessity of the fully quantum mechanical approach for all five particles is established.