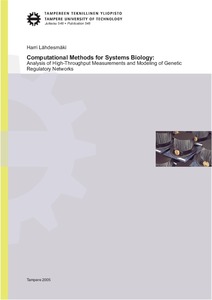 
This thesis introduces novel computational methods for the problems encountered in the field of systems biology. The content of the thesis is three-fold.


The first part introduces methods for high-throughput measurement preprocessing. Two general methods for correcting systematic distortions originating from sample heterogeneity and sample asynchrony are developed. The former distortion is typically present in experiments conducted on non-homogeneous cell populations and the latter is encountered in practically all biological time series experiments.


The second topic focuses on robust time series analysis. General methods for both robust spectrum estimation and robust periodicity detection are introduced. Robust computational methods are preferred because the exact statistical characteristics of high-throughput data are generally unknown and the measurements are also prone to contain other non-idealities, such as outliers and distortion from the original wave form.


The third part is devoted to integrated analysis of genetic regulatory networks, or biological networks as they are also called, on a global scale. The effect of certain Post function classes on general properties of genetic regulatory networks, such as robustness and ordered and chaotic behavior, is studied in the Boolean network framework. In order to facilitate the analysis of generic properties of biological networks, efficient spectral methods for testing membership in the studied Post function classes and the class of forcing functions (as well as its variants) are introduced. Fast optimized search algorithms are developed for the inference of regulatory functions from experimental data. Relationships between two commonly used stochastic networks models, probabilistic Boolean networks (PBN) and dynamic Bayesian networks (DBN), are also established. This connection provides a way of applying the standard tools of DBNs to PBNs and the other way around.