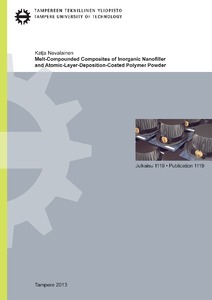 Much research is being done to develop material combinations of polymer nanocomposites with tailored properties. Industry has been slow to adopt this technology mainly because several challenges such as good nanofiller dispersion and sufficient interfacial interaction between filler and matrix must be overcome to develop nanocomposites with truly enhanced properties. In this work, the effect of three different melt-compounding approaches to form thermoplastic nanocomposites was explored. The purpose was to study the effect of the processing method on nanofiller dispersion and the properties of a variety of nanofilled matrixes. First, the focus was drawn on composites formed from readily available commercial fillers and on processing techniques common to conventional plastics, but later composite materials tailored by atomic-layer-deposition (ALD) technology were studied.

Direct melt-compouding of polycarbonate nanoclay composites showed a mixture of exfoliated, intercalated, and confined morphology. Also large clay agglomerates were found. Samples showed increased Young’s modulus and tensile yield strength when compared to unfilled polycarbonate, but their ductility was significantly affected in tensile loading. A transition from ductile to brittle deformation occurred at clay loadings higher than 3 wt.%. The results also showed that nanoclay surface modification plays an important role, e.g., in terms of Young’s modulus enhancement. On the other hand, a two-step masterbatch dilution approach of polypropylene composites filled with 4 wt.% of micro-calcium carbonate, nano-calcium carbonate, nano-titanium dioxide, nanoclay, and multi-walled carbon nanotubes suggested no or only minor improvements in Young’s modulus and tensile yield strength but considerably improved fire behavior compared to its unfilled, coupling-agent-modified counterpart. Improved fire properties were obtained though both individually dispersed fillers and large filler agglomerates were observed. The highest reduction in peak heat release and the lowest burning rate were obtained for a coupling-agent-modified polypropylene filled with multi-walled carbon nanotubes. This was attributed to the matrix’s high filler volume content, but also other factors such as the composite’s lower oxygen permeability and higher thermal stability over other studied polypropylene composites contributed to the cone calorimeter results.

ALD-thin film coating of micron-sized polymer powder and subsequent melt-compounding yielded individually dispersed ribbon- or plate-like metal oxide nanofillers. However, this composite formation approach was somewhat sensitive to ALD process precursor remnants, by-products, and/or successive thermal treatments. The results indicated that if the polymer had poor chemical resistance and if a significant amount of ALD processing chemicals were left on ALD-coated particles, the polymer’s molecular weight and melt viscosity decreased abruptly. However, this was observed only in titanium dioxide-filled polyamide but not in the other studied materials such as aluminium-oxide or aluminium-doped-zinc-oxide filled polyamide and polystyrene nanocomposites. Even if ALD-created nanofillers with a high aspect ratio were well dispersed throughout the polymer matrix, the final mechanical properties of the studied materials were only modestly enhanced. One explanation for this is the low nanofiller content (<1.5 wt.%) measured in the composites. The ALD-tailored nanocomposite formation approach is still considered attractive, and incorporating ALD-created nanofillers in a polymer matrix is expected to improve the composite properties, when (i) polymer molecular weight degradation is avoided, (ii) the nanofiller content is kept high, (iii) the created thin film is strong, and (iv) the load transfer between matrix and filler is efficient.

Though the manufacture of composites with well dispersed nanofillers and good filler interaction with the polymer at a reasonable cost remains challenging, this work provides processing guidelines for further development of nanocomposite materials for practical applications.