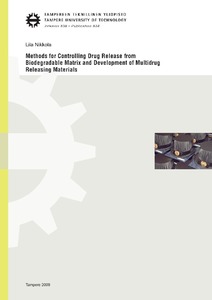 Local drug delivery devices are advantageous for use in pharmaceutical therapies to control tissue reaction at implant site. Tissue healing and regeneration is a multistep process, control of which is challenging. The presence of a therapeutic dose of several active agents at suitable time frames during tissue healing and regeneration could lead to optimal outcome of the implant. A scaffold where cells can attach and proliferate can considerably enhance the regeneration of tissue. To obtain the suitable dose and release period of drug, the control of the release rate from biodegradable polymeric devices has been based on the degradation behavior of polymer and the diffusion rate of the drug from the polymer matrix. In addition, most of the drug-releasing materials carry only a single agent lacking the possibility for enhanced therapeutic effect.

The main objective in this thesis was to manufacture biodegradable drug-releasing composites with controlled drug release. To enhance the tissue ingrowth, three studies of drug releasing nanofiber scaffolds for use as a component in composite are also introduced. In polymer composites, the control of the drug release rate was achieved by a combination of components having different release profiles into one piece, i.e. a multicomponent rod. These rods were intended for use in bone fixation. In addition, studies are presented of the development of multidrug-releasing biodegradable polymer composites in the form of multilayered and multiphase composites. The manufacturing methods of components comprise multiple melt and solvent-based polymer processing techniques (electrospinning, melt extrusion, fiber spinning, compression molding, and emulsion evaporation method). The biodegradable polymers that were used in these studies are based on lactic acid and its copolymers. The selection of active agents was based on the control of inflammatory reactions and hence, they comprised the well-known anti-inflammatory agents, diclofenac sodium and dexamethasone. A third agent, bone-forming bisphosphonate was also loaded in the multilayer composite, which was aimed at bone applications as tissue guiding material.

The release kinetics and some explanatory studies on microstructures, thermal properties, and mechanical properties were performed. The results showed that the use of slowly degradable or high molecular weight faster degradable biodegradable polymers in drug-loaded nanofibers can extend the release to almost three months. In addition, with slowly degrading polymer the microstructure was maintained after the drug release. The release from multicomponent rods can be controlled by combining the components with different release profiles. However, the mechanical strength of the rods was unsatisfactory and only one rod type could be used in low stress applications, such as cranio-maxillofacial fixation. In the drug release studies, it was found that the drug release from multilayer composite was dependent on the processing variables. The manufactured multilayer composite had suitable release profiles for possible use in bone guidance applications. The drug release rates from the multiphase fiber composite could be varied by loading agents in different polymer phases, i.e. components, thus offering the possibility to vary the release of different agents as desired.