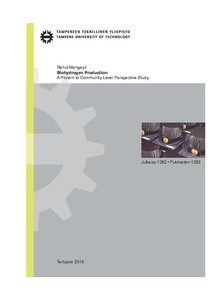 Excessive usage of traditional energy reserves leading to increased environmental pollution and global warming have strongly urged for alternative sustainable energy sources. Due to non-polluting nature and high energy yields, hydrogen (H₂) gas is considered as an ideal candidate for alternative fuel. Biohydrogen (bioH₂) production from organic wastes is a sustainable approach, addressing energy production through organic waste disposal. Organic wastes such as lignocellulosic biomass and industrial glycerol, a by-product of biodiesel manufacturing process, have been recently investigated for their bioconversion potential. However, bioconversion of such organic wastes is a challenge due to the presence of impurities, toxic degradation products and complex nature. In comparison to pure bacterial strains, natural microflora could be an ideal inoculum choice offering better adaptability, substrate utilization efficiency and bioconversion rates. Another challenge to ensure efficient fermentation is to optimize various physico-chemical factors such as pH, temperature, substrate selection and concentration, medium compounds, and H₂ removal and collection due to individual and interactive effects on microbial growth, metabolism and hydrogenase enzyme.

Microbial community pre-dominated with Clostridium spp. enriched from activated sludge fermented crude glycerol mainly to H₂, CO₂, acetate, butyrate and ethanol. Optimal bioprocess conditions for the enriched inoculum were experimentally observed to be pH 6.5, 40˚C and 1g/L crude glycerol. The H₂ yield from raw glycerol at optimal cultivation conditions was 1.1 mol-H₂/mol-glycerol consumed . At elevated crude glycerol concentrations, substrate utilization and H₂ production were limited due to the presence of impurities in the crude glycerol fraction. The bioconversion of crude glycerol to H₂ was further improved by statistical optimization of the growth medium composition.

Initial screening with Plackett – Burman design identified NH₄Cl, K₂HPO and KH₂PO₄ with individual and interactive effects on H₂ yield. Among the three identified media components, NH₄Cl and KH₂PO₄ imparted the maximal significance and were optimized in scrutiny. A series of statistical models identified the optimal media composition for improved H₂ production from crude glycerol fermentations and were successful in improving the H₂ yield by 29% (1.42 mol-H₂/mol-glycerol consumed ) in comparison to previously reported value (1.1 mol-H₂/mol-glycerol consumed ).