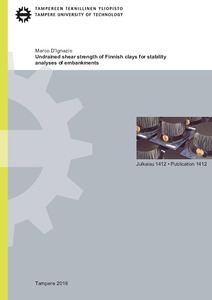 Firstly, a multivariate database of Finnish clay data points is compiled in order to derive correlations for undrained shear strength specific to Finnish clays. For each data point, information on su from field vane, consolidation stresses and other physical properties is available. The dependency of su on overconsolidation ratio (OCR) and index parameters is studied. The new correlations are derived through regression analyses. Results show that the dependency of su on index parameters is more marked when the uncorrected field vane measurements are considered. On the other hand, when measured su is corrected for strain rate and converted into mobilized su, such dependency becomes negligible. The new correlations are validated through comparison with existing correlations from the literature. Bias and uncertainties of the new transformation models are evaluated through an independent database consisting of clay data points from Sweden and Norway. The main result is that the new correlations are characterized by lower uncertainty than the other commonly used correlation models.

In order to study some of the special characteristics of soft sensitive clays, the Perniö failure test is analyzed through the finite element method (FEM) using the advanced NGIADPSoft model, which includes anisotropy and strain-softening behavior of sensitive clays. A series of laboratory and in-situ tests are used to determine the anisotropic shear strength of Perniö clay and Perniö dry crust. Stability analyses are performed using the software PLAXIS 2D and the influence of stress path dependency and post-peak strength reduction on the failure load is evaluated. Calculated displacements are compared to field measurements from the experiment. A good agreement is observed between field observations and calculation results. The study indicates that both su anisotropy and strain-softening have a notable impact on the undrained behavior of the Perniö embankment. Furthermore, it was shown how the modelling of post-peak properties influences the computed failure mechanism.

Engineering aspects related to the topics object of study are discussed and some complex issues are addressed from a practical point of view. Firstly, some indications on the use of the new correlations for su of Finnish clays are provided. Secondly, suggestions about how to derive soil parameters for FE total stress soil models are given. Finally, a simplified methodology is proposed to model strength increase in total stress analyses.