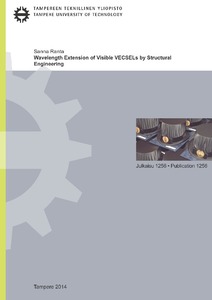 Optically-pumped vertical external-cavity surface-emitting lasers (VECSELs), also called semiconductor disk lasers, are versatile laser devices that are capable of emitting high output powers in a circular, low-divergence beam at emission wavelengths adjustable by the semiconductor gain medium. This unique combination of laser characteristics makes the VECSEL a desirable laser source for various applications ranging from biophotonics and spectroscopy to laser projection. Although VECSELs can emit fundamentally in a wide spectral range, the visible part of the electromagnetic spectrum cannot be fully accessed with direct VECSEL emission. This is due to lack of suitable gain and substrate materials as well as cost-effective pump lasers that are able to emit high optical powers. Thus, the wavelengths below 630 nm have to be generated typically via nonlinear frequency conversion.

This thesis is concerned with the development of VECSEL technology enabling extension of the emission range in the visible part of the spectrum, particularly in the yellow-orange (around 560–590 nm) range and at the red wavelength of 675 nm. Yellow-orange light is generated via frequency doubling near-infrared radiation emitted by GaInAs/GaAsP/GaAs VECSELs, whereas red light is directly generated from a GaInP/AlGaInP/GaAs VECSEL. The thesis reveals the design and growth procedures utilized to obtain high-quality GaInAs/GaAsP/GaAs VECSEL gain medium, and reports the first demonstration of a passively mode-locked GaInP/AlGaInP/GaAs VECSEL emitting at 675 nm. The use of reduced growth temperature and addition of strain compensation are shown to be effective methods in obtaining high quality GaInAs/GaAsP/GaAs gain mirrors. Consequently, over 20 W of frequency-doubled emission has been reached with the GaInAs/GaAsP/GaAs gain mirrors in subsequent studies.