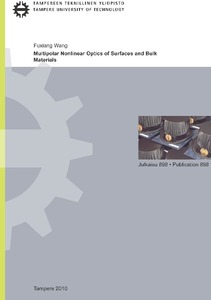 The topic of this Thesis is related to the determination of second-order nonlinear optical properties by optical second-harmonic generation. Important advances are achieved with regard to two different aspects. First, the reliability of the traditional second-harmonic technique used to characterize nonlinear properties of surfaces and thin films is carefully analyzed and then improved. Second, a new technique based on the use of two beams at the fundamental frequency is used to address the origin of the second-order response of isotropic and centrosymmetric materials. Interestingly, although the second-order response of such materials is forbidden within the electric-dipole approximation of the light-matter interaction, the response becomes allowed when magnetic-dipole and electric-quadrupole effects are taken into account. Furthermore, the new two-beam technique allows the dipole-allowed surface response and the multipolar bulk response to be separated in an unambiguous and quantitative way, which has not been possible earlier. The relative values of the nonlinear coefficients for surface and bulk responses are determined for important special cases of glasses and metal films using a proper theoretical model to interpret the experimental results. In addition, their absolute values are calibrated against a nonlinear reference crystal. The two-beam technique thus provides a simple and direct method to determine the relative importance of different multipolar effects, and therefore opens the door to develop and characterize new nonlinear optical materials with large multipolar responses.