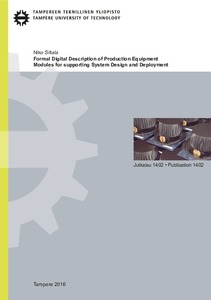 The cornerstone of any solution to the above-mentioned challenges is the concept of being able to create formalised, comprehensive descriptions of all production resources. Providing universally-recognised digital representations of all the multifarious resources used in a production system would enable a standardised exchange of information between the different actors involved in building a new production system. Such freely available and machine-readable information could also be utilised by the wide variety of software tools that come into play during the different life cycle phases of a production system, thus considerably extending its useful life. These digital descriptions would also offer a multi-faceted foundation for the reconfiguration of production systems. The production paradigms presented here would support state-of-the-art production systems, such as Reconfigurable Manufacturing Systems (RMSs), Holonic Manufacturing Systems (HMSs) and Evolvable Production Systems (EPSs).

The methodological framework for this research is Design Research Methodology (DRM) supported with Systems Engineering, Action Research, and case-based research. The first two were used to develop the concept and data models for the resource descriptions, through a process of iterative development. The case-based research was used for verification, through the modelling and analysis of two separate production systems used in this research. The concept, on which this thesis is based, is itself based on the triplicity of production system design, i.e. Product, Process and Resource. The processes, are implemented through the capabilities of the resources, which are thus directly linked to the product requirements. The driving force behind this new approach to production system design is its strong emphasis on making production systems that can be reconfigured easily. Successful system reconfiguration can only be achieved, however, if all the required production resources can be quickly and easily compared to all the available production resources in one unified, and universally accepted form. These descriptions must not only be able to capture all of a production system’s capabilities, but must also include information about its interfaces, kinematics, technical properties and its control and communication abilities.