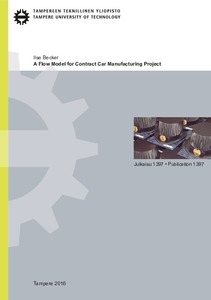 This study is about contract car manufacturing (CCM) projects in a case company. The aimis to find out if it is possible to create a flow model that will fit to these projects in generaland that could support the flowing execution of the project. The target is expressed in thehypothesis of this study: It is possible to create a common flow model for a CCM projectand that can be applied to different project cases in the same context.

The research is based on three literature domains, Design Science, Project Management, andSystems Thinking. They all are present in complex engineering projects execution but haveseldom been considered together in previous research.

The project analysis is based on four research questions. The first one aims to name the subproject areas, which build up the CCM project content. It will serve as a framework indeveloping the flow model. The sub-projects form the needed transformation process wherethe new car model can be manufactured in serial production. The three other researchquestions want to find out what kind of obstacles there are that prevent the project fromflowing and what kind of action support the flow mode during the project execution. Theissues that keep the project from flowing are connected to the important interdependencies. They are often on the external stakeholder’s responsibility and are not as easy to control asthe ones that are in own hands. This study analyses the interdependencies between projectdeliverables and points out the most important ones that have the largest amount ofinterdependencies with other deliverables. The most important ones have two features, theyhave a large amount of interdependencies and they need an output from external stakeholder. When the project management is well aware of the schedule risks and is proactivelyprepared to them this can support the project flow. The activities that produce the riskydeliverables should be described and planned in detail so that it is possible to control theproceeding step by step if the risk actualises.

The analysis of the four case projects showed that a general flow model for CCM projects isplausible and can be implemented in all projects. Furthermore, this modelling principle canbe adapted to other kinds of projects as well. The deliverables only need to be formedaccordingly.