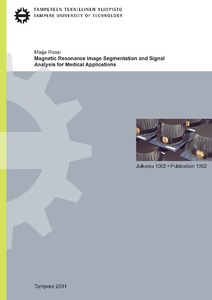 Magnetic resonance imaging (MRI) is a medical imaging method used mainly for imaging soft tissue, such as the brain. It has various advantages, such as the noninvasive and nonionizing technique used; high contrast and signal-to-noise ratio; and excellent definition of both anatomical and physiological details.
Most of the current clinical MRI applications are qualitative. However, to reduce both intra- and interreader variability and thus, possibly, to improve patient diagnosis, treatment, and recovery, advantages may be gained through quantitative means. These include parametric imaging methods, such as T1- and T2-mapping, and analyses, such as histogram analysis, segmentation, and volumetry. These methods, along with qualitative imaging, were studied at various magnetic field strengths in healthy volunteers, non-Hodgkin lymphoma patients, patients with mild traumatic brain injury, and patients with symptoms of Parkinson's disease.
Quantitative volumetric analyses using semi-automatic segmentation of both MRI and computed tomographic images were easy and reliable but slow. In the lymphoma patients, the tumor volume was greatly reduced, beginning immediately after the initiation of chemotherapy. A small residual tumor volume six months after the completion of treatment was predictive of survival. Besides percentage volume changes, absolute tumor volumes and their absolute changes during early stages of treatment were considered useful. Several imaging sequences, including both quantitative and qualitative, were correlated with putative iron content. Their clinical correlation and the possibility as early biomarkers of disease progression require further investigation.