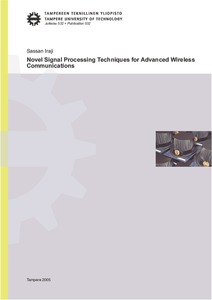 There is a high demand to increase the data rate and quality of current wireless communication systems. Therefore, techniques that can increase the data rate, improve the spectral efficiency and enhance the performance of wireless communication systems are of great interest. One way to meet the above challenges is to exploit multiple transmit and receive antennas and in particular space-time processing techniques. These concepts have been recently proposed and extensively investigated. Nevertheless, designing space-time codes for multiple fading channels remains a big challenge. The first part of this thesis deals briefly with the multiple-antenna concept, in general, and the space-time processing techniques, in particular. Specifically, we focus on the design of space-time block codes for a multipath fading channel. Previous work has concentrated on the design of orthogonal space-time block codes. We propose a non-orthogonal space-time block code for multipath fading channels. Our design is based upon the upper bounds of the average pairwise error probability. It is shown that this non-orthogonal space-time block code takes advantage of the diversity provided by a multipath channel.


Another way to increase the performance of a cellular wireless communication system is to implement multiuser detection. In the second part of this work, we have designed an interference canceller. This is based on the expectation-maximization (EM) algorithm for the space-time block coded WCDMA system, which is the airinterface of the currently being deployed 3G system, over a multipath fading channel. The EM algorithm iteratively seeks the maximum likelihood solution when a direct solution is not feasible. We assess the performance of the algorithm in an HSDPA system, an extension to WCDMA. It is shown that the parallel-interference cancellation (PIC) and the conventional matched filter are special cases of our proposed EM algorithm. Performance of the receiver is significantly improved by using the EM algorithm.


As it is well known, one of the main impediments of wireless communications systems is signal fading caused by a multipath channel. Multicarrier techniques such as OFDM and a combination of the OFDM and CDMA (MC-CDMA) can overcome the above challenge. OFDM and MC-CDMA convert a frequency-selective channel into a parallel collection of flat frequency subchannels. In the third part of this thesis, we have proposed MC-CDMA as an advanced method for a future wireless communication system. For such a system, we have studied different receiver algorithms and a channel estimation algorithm. We have studied the performance of different receivers based on the EM, MMSE, PIC and MRC algorithms. Our results show that in a SISO MC-CDMA system, the MMSE receiver provides high performance gain compared to the MRC receiver. The PIC and the EM algorithm based receivers can further improve the performance of the MMSE receiver if we take the output of the MMSE receiver to be used as initial values for them. The complexity analysis of the different parts of a SISO MC-CDMA receiver is presented. Due to the simplicity of the space-time block coding technique, we have investigated the performance of the above receiver algorithms in a space-time block coded MC-CDMA system. It is shown that by increasing the number of antennas we achieve greater improvements in the performance of the system. In the proposed STBC MC-CDMA system, we show that our PIC and EM-based algorithms can improve the MRC performance if we take the MRC output to be used as initial values for those algorithms.