Rich & Orderly: The Role of Visual Complexity and Order in Intuitive Preference for Apartment Interiors 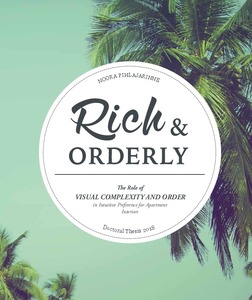 Both everyday experience and scientific knowledge have demonstrated the great power of the environment to influence not only our emotions and behaviour but also our well-being and health. There is also reason to believe that intuitive preference exerts a significant influence on choice of apartment. Environmental preferences have been studied widely in both natural and urban contexts as well as in the context of external building styles. However, considering the amount of time that people spend inside buildings, including homes, systematic research on visual preferences for architectural interiors seems to be surprisingly negligible. Therefore, studying architectural characteristics that increase visual preference for apartment interiors has to be considered relevant from the perspective of both the well-being and health of people, and also that of enhancing the quality of apartment stock.

As previous research is scarce on architectural characteristics and their influence on preference in the context of apartment interiors, I ended up searching for characteristics through a broad, interdisciplinary theoretical framework. Two concepts - visual complexity and order - were found to emerge repeatedly from this theoretical framework. In the field of aesthetics, a great number of both theoretical and experimental studies lend support to the assumption that visual aesthetic preference would in one way or another be related to visual complexity and order. Similar results have been obtained in the field of environmental psychology, mainly in the context of outdoor environments; visual elements that promote both exploration and comprehensibility of the environment have been found to increase environmental preference. Besides, several architectural characteristics that can be seen to relate to visual complexity and order are typical of traditional architectural styles, and classical architectural theories emphasize their role in the context of building aesthetics. However, it seems that these concepts have received only minor attention in present-day architectural discourse, research and theory.

Based on the literature, a broad set of architectural variables that were considered to potentially explain visual complexity, order and preference of apartment scenes, was created for use in the experimental part of this thesis. Additionally, a total of forty-three test images - where the architectural variables in question obtained different values - were created for this purpose. In the experiment, 107 medical students, who acted as test subjects, evaluated the images according to their interestingness the term used in this thesis to describe the level of interest they aroused - (an operationalized measure for complexity), spatial organization (an operationalized measure for order) and pleasantness (an operationalized measure for appeal or preference). The relationships between these evaluations and the architectural variables were then analysed by using regression analysis, by comparing the similarities and differences in the evaluations of four subgroups (males, females, participants with prior artistic training and participants without prior art training) and by visually analysing the images and their ratings. In addition, the different affective qualities that might be related to different architectural characteristics were assessed by using the Circumplex model for affective quality attributed to environments created by Russell, Ward and Pratt (1981).