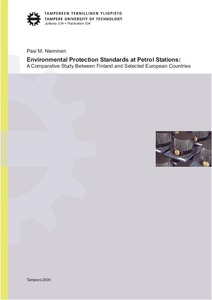 This study compares environment protection standards at Finnish petrol stations with levels in nine other European countries. The countries selected for comparison and the collection of data were: Germany, Hungary, Lithuania, Norway, Poland, Russia, Spain, Sweden and United Kingdom. With the exception of Norway and Russia, all these states are members of the European Union. Together, they provide a representative cross-section of Europe countries on which to base a comparison with Finnish levels of environmental protection. Three of these countries, Norway, Russia and Sweden, also share a common land border with Finland.


The main method used in the study was sampling research. Major research materials included risk analysis, an extensive questionnaire with respondent feedback and a practical field investigation of each country. It is hoped that the outcome of this study will be of benefit to stakeholders in this sector of the oil industry such as the regulatory authorities, oil companies, contractors and designers.


The methods adopted here confirmed that it is possible to evaluate environment protection levels in Finland and compare them internationally. The results show that in Finland such levels were lower than initially expected. Though Finnish levels were found to be higher than in Norway and Russia and similar to Sweden, they were markedly lower than in Germany and Hungary and lower than in Lithuania, Poland, Spain and United Kingdom. The results indicate a clear need to improve standards of environmental protection at Finnish petrol stations.


Discounting Sweden and Norway, the main reason that Finland performs poorly in such international comparisons of environmental protection is its lax legislation. However, it was noted that Finnish oil companies are prompt in adopting new rules and regulations. This strongly suggests that in Finland legislation may be the best way to improve environment protection at petrol stations.


The results of this study are expected to provide practical guidelines for the Finnish oil industry. Environment protection at Finnish petrol stations could be improved by legislation requiring the installation of vapour recovery stage 2-systems, 2-wall tanks instead of 1-wall tanks, better pavement materials, periodic inspection processes and the validation of professional qualifications of designers and contractors. This study also shows that there is scope for further research in the field.


It is hoped that the research carried out here will provide the impetus for further study in the crucially important area of environment protection at petrol stations.