The Role of Inorganics in Biomass Gasification: Catalytic Effects on Char Reactions and Toxic Emissions 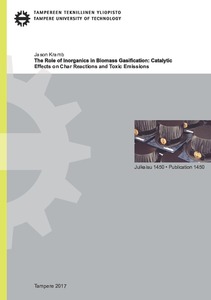 This thesis studied the role of inorganic elements in biomass gasiﬁcation, focusing on catalytic effects in char gasiﬁcation and removal of toxic metals from the product gas. A combination of experimental, including gasiﬁcation using thermogravimetric analysis and ﬂuidized beds, and modeling techniques were used.

Spruce and birch woods were leached of the naturally occurring ash forming elements and loaded with varying amounts of calcium or potassium. These woods were then gasiﬁed in either an isothermal thermogravimetric analysis device or a bubbling ﬂuidized bed reactor. In the case of the spruce wood gasiﬁed using the thermogravimetric analysis device, char conversion models were evaluated against the measured data and an empirical model was developed which uses the concentration of calcium and potassium in wood to predict the conversion rate behavior of the char when gasiﬁed in CO2 . The results from the ﬂuidized bed gasiﬁcation tests of birch wood showed that calcium was the primary active catalyst in the wood and the increased reactivity resulting from calcium doping was clear even in the much larger scale of a ﬂuidized bed compared to the thermogravimetric analysis. The potassium doped samples did not exhibit increased reactivity in the ﬂuidized bed due a nonreactive layer of secondary char being deposited on the char surface.

The behavior of arsenic in the product gas of chromated-copper arsenate wood was modeled using equilibrium calculations and measured experimentally in a bubbling ﬂuidized bed. The equilibrium model accurately predicted that the product gas could be cleaned by cooling the gas below 260°C and ﬁltering to remove condensed arsenic.

While there are methods for modeling the effects of inorganics in catalyzing char gasiﬁcation, further research into interconnected issues of surface area, pore sizes, pyrolysis conditions and inorganic concentrations is needed. Similarly, while equilibrium modeling has been shown to predict the behavior of arsenic during gasiﬁcation in some cases, there are many gaps in understanding which arsenic compounds are most relevant.