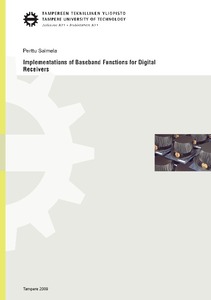 With ever higher data rates, the complexity of baseband processing increases basically for two reasons. Firstly, the required processing rate is proportional to the bit rate and, secondly, with higher data rates, more demanding and sophisticated algorithms must be applied. For example, new wireless telecommunications systems like 3G long term evolution (LTE) can have even a 100 Mbps data rate and multipleinput multiple-output (MIMO) transmission methods are applied. Thus, the problem domain of implementation of baseband functions includes both addressing the high computational complexity and describing the implementations in a flexible way so that even complex algorithms can be used without extensive efforts.

As a result, the essential computational challenges and the design space of wireless receivers is clarified. The work in this Thesis shows how the computation of the addressed baseband functions can be implemented efficiently, and the work shows how they can be implemented when a programmable platform is targeted. The results show that the benefits of the programmability do not sacrifice efficiency of the implementation.