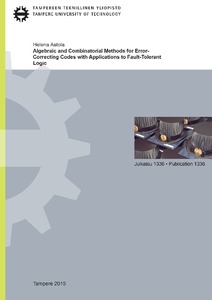 In this thesis, algebraic and combinatorial tools are used in the study and applications of error-correcting codes and logic design. In the first part, decision diagrams and error-correcting codes are combined to introduce fault-tolerance to logic circuits. The proposed method introduces fault-tolerance to the representations of functions, and hence, no additional checker circuitry is needed in the implementations. With suitable technology, the layout and complexity of the final design is directly determined by the error-correcting decision diagram. The fault-tolerance analysis shows that, even with moderately high gate error probabilities, such robust constructions will have a significantly decreased probability of an incorrect output. In terms of complexity, using codes in the Lee metric reduces the number of nodes of the resulting diagram compared to using codes in the Hamming metric.