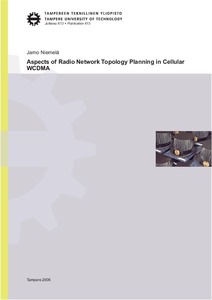 
The content of this thesis has been divided into three parts. The first part concerns the assessment of different site and antenna configurations on the network coverage, system capacity, and expected functionality of WCDMA network. Fundamentally, the target of this part is to provide planning guidelines for optimization of the WCDMA radio network topology. Moreover, it assesses the impact of site locations, sectoring, and different antenna configurations on optimum radio network topology through the definition of coverage overlapping index. In addition, this part will further cover analysis of the impact of site locations and sector overlapping on the network performance. The most extensive research is performed regarding antenna downtilt that provides as an output valuable information of the selection of antenna downtilt angle for different cell types. Finally, some planning aspects are provided for site evolution from 3-sectored to 6-sectored sites.


The second part of the thesis introduces a method for evaluating the quality of topology planning through radio interface measurements. In addition, it offers an example of the functionality and performance of WCDMA radio network planning tool. The third part of the thesis addresses the impact of supplementary radio network element or functionalities on topology planning. Firstly, the impact of repeater deployment is studied in capacity-limited networks through simulations and radio interface measurements. Secondly, the effect of a mobile positioning method called cell ID+RTT is studied with respect to the topology planning process.