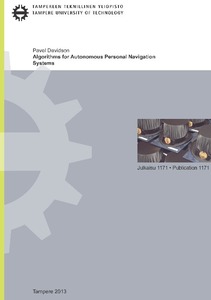 Personal positioning is a challenging topic in the area of navigation mainly because of the cost, size and power consumption constraints imposed on the hardware. Satellite based positioning techniques can meet the requirements for many applications, but cover well only outdoor environment. Problems like weak satellite signals make the positioning impossible indoors. Urban canyons are also difficult areas for GNSS based navigation because of large multipath errors and satellite signal outages. Many applications require seamless positioning in all environments. However, there is no overall solution for navigation in GNSS denied environment, which is reliable, accurate, cost effective and quickly installed. Recently developed systems for indoor positioning often require pre-installed infrastructure.

The first algorithm computes positioning for a map aided navigation system designed for land vehicles traveling on road network. The novelty is in application of particle filtering to vehicle navigation using road network database. The second algorithm is aimed at map aided vehicle navigation indoors. The novelty is in the method for correction of position and heading. The third algorithm computes solution for pedestrian navigation system, which is based on body mounted inertial measurement unit and models of human gait.