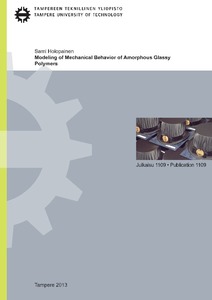 This thesis is concerned with the mechanical behavior and constitutive modeling of amorphous polymers. Amorphous polymers are employed in numerous applications that cover electronics, optical instruments, the automotive industry as well as consumer products. This board range of applications is due to their good optical properties, high chemical resistance, high flexibility, good reforming properties, low weight relative to strength and their high energy absorption under impact loadings. Due to the numerous engineering applications, the accurate modeling of mechanical behavior is of major importance.
Amorphous polymers are characterized by a disordered microstructure which is formed of long polymer chains. In constitutive models for amorphous polymers, the microstructure is usually represented by an overall chain network which consists of an assembly of individual chains arranged in unit cells. The transition from microstructure to macroscopic level is performed via a homogenization which allows the micro-stretches to fluctuate around the macro-stretches. The present state of modeling amorphous glassy polymers is revealed through reviewing several models that can be considered as pioneering works in this field of research. To evaluate the models, several numerical examples are presented.
A comparison of the state-of-the-art model responses and the experimental data reveals that the model are not able to capture the transient effects after loading rate changes and long-term behavior involving recovery, which is highly overestimated by the models. To compensate for the shortcomings of the models, this thesis proposes an extension for the eight-chain version of the Boyce et al. (1988) model (BPA model) and it will be termed the EBPA model. The isotropic part intrinsic hardening in the material is rheologically described by a dashpot which is arranged in parallel with a nonlinear Langeving spring for modeling kinematic hardening. The two components for the isotropic and the kinematic hardening are modeled by the internal state variables. The purpose of the extra dashpot is to increase the isotropic hardening in relation to the kinematic hardening and thereby suppress a premature Bauchinger effect observed in the simulations. This is of major importance during relaxation simulations at low stress levels where the plastic evolution is particularly governed by the internal state variables under consideration. Moreover, the elastic spring in the original BPA model is replaced by a simple Kelvin-chain involving a Kelvin-like element in series with an elastic spring. The Kelvin element is employed for predicting creep and recovery, while its combination with the elastic spring is aimed at describing the stress relaxation.
In addition to homogenous deformation, the EBPA model is calibrated to experimental data for inhomogeneous deformation. The tests were performed in the Laboratory of the Department of Materials Science (DMS) in Tampere University of Technology (TUT). The data acquired from the cold drawing of the dumbbell-shaped polycarbonate specimen contains the load-displacement diagrams for monotonic as well as non-monotonic loadings involving several loading cycles and long-term recovery.
Based on the calibration of the EBPA model both for the homogeneous and inhomogeneous deformation, the cold drawing process is simulated using the finite element method. The model responses obtained from the simulations show that the parameters which were derived from calibration for homogeneous deformation cannot be used to predict experimental response of inhomogeneous deformation. In order to find the mechanisms that are able to explain this discrepancy, the role of strain localization in the chain density, the initiation and propagation of shear bands and crazes as well as in the nucleation and growth of voids is investigated. The finite element simulations for inhomogeneous deformation indicated only a small influence of the number of entanglements and chain density on the macroscopic stress response when they were modeled without taking volume changes into consideration. However, a reduction in chain density together with void growth and crazing led to more diffuse and stable neck. The present numerical results also indicated that the plastic stability is essentially controlled by crazing, whereas void growth in conjunction with an increased interaction between the voids reduces amount of intrinsic softening during localized deformation. As a result, the difference between the model calibrations governing intrinsic softening under homogeneous and inhomogeneous deformation decreased considerably. The EBPA model augmented by the models for void growth and crazing allows the simulation of inhomogeneous deformation by utilizing the material parameters obtained from simple uniaxial tests for homogeneous deformation.
Using the calibrated parameters, the predictive capability of the EBPA model both for homogeneous and inhomogeneous deformation is evaluated. Despite the relative simplicity of the model, a comparison with the experimental results show that the model is well able to capture the nonlinear response of amorphous glassy polymers during monotonic loading, unloading, creep and recovery. The proposed model is also found to be predictive for isothermal responses at various strain rates as well as for large strain anisotropic responses pf preoriented polymers.