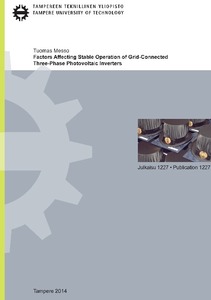 The amount of grid-connected photovoltaic energy generation has grown enourmously since the beginning of the 21st century. Photovoltaic power plants are interfaced with the utility grid by using three or single-phase inverters which convert the direct current generated by the photovoltaic modules into three or single-phase alternating current. The photovoltaic inverters have been observed to degrade power quality in the grid and to suﬀer from reliability problems related to their control software. Therefore, the design of these inverters has become a signiﬁcant research topic in academia and in the power electronic industry.

The control mode of the upstream DC-DC converter is shown to have a signiﬁcant eﬀect on the minimum DC-link capacitance which is required for stable operation due to a RHP-pole in the inverter control dynamics. However, operating the DC-DC converter under input-voltage control is shown to remove the RHP-pole and, consequently, the constraint imposed on the size of the minimum DC-link capacitance.

The phase-locked-loop (PLL) is shown to make the q-component of the inverter’s output impedance resemble a negative resistor. Based on the small-signal models, the negative resistance is shown to appear at the frequencies below the crossover frequency of the PLL. Therefore, a wide-bandwidth PLL causes easily instability due to the negative-resistance behavior when the grid inductance is large.