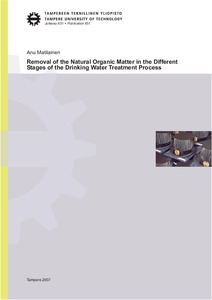 
Matilainen, A.
Tampere University of Technology

Surface waters in Finland contain usually a high amount of natural organic matter (NOM). Incomplete removal of NOM in the drinking water treatment has an adverse effect on the water quality. Hence, it is desirable to reduce the concentration of the NOM from the drinking water. The quantification and characterization of the NOM in the different stages of the purification process is important in order to improve and optimise various drinking water treatment processes. In this study, the high-performance size-exclusion chromatography (HPSEC) fractionation with UV254 detection, and a number of conventional water quality analyses were used to measure the organic matter content and characteristics in water, and the transformation of the organic matter during the purification process.


In this study, the removal of the NOM was monitored in three full-scale water treatment processes. Besides the conventional unit operations (coagulation/flotation/sedimentation), the enhancement of NOM removal by activated carbon (AC) filtration and ozonation, followed by AC filtration, were evaluated. Moreover, two pilot-scale studies for the enhanced NOM removal were conducted; nanofiltration (NF) as a refining phase after conventional treatment, as well as ozonation followed by AC filtration.


The conventional treatment processes (coagulation/flotation/sedimentation) removed the high molar mass (HMM) organic matter almost completely (over 94%). The intermediate molar mass (IMM) matter was more difficult to be removed; 12-55% removal was obtained. Still, the hardest fraction to be removed was the low molar mass (LMM) organic matter, which were removed only by 3-14% from chemically coagulated water. The optimisation of the coagulation/flotation process by selection of the proper coagulant improved the NOM removal. The process modification by replacing the aluminium sulphate with ferric sulphate enhanced the NOM removal 10%. The greatest difference between the two coagulants occurred in the removal of the NOM that has molar mass of 1000-4000 g/mol (IMM). These IMM compounds were removed 25% more effectively with iron-based than with aluminium-based coagulant.


The AC filtration enhanced the removal of NOM. The HMM substances were not removed any further on the AC filtration, but 30% more of IMM matter was removed. The LMM matter was also reduced slightly. However, occasionally the smallest fractions of NOM even increased in the AC filtration. Regeneration of the AC filters had a significant effect on NOM removal. Immediately after regeneration the efficiency of the filter increased about 50%. However, the NOM removal efficiency was reverted to the approximate same level as before regeneration, after few months of operation.


The ozonation on the full-scale process removed primarily the smaller molar mass fractions of NOM. Removal rates of 23% and 32% were observed, regarding IMM and LMM matter, respectively. Thus, it was concluded that the NOM was degraded to the really LMM compounds, with little or non UV-absorption capacity, thus not showing in HPSEC-UV254 measurement. According to the pilot-scale ozonation study, the amount of assimilable organic carbon, AOC, increased with increasing ozone dose, hence implicating that NOM was degraded. Nevertheless, the AC filtration after ozonation was effective in the removal of produced AOC.


The nanofiltration (NF), as a refining phase after conventional treatment, removed the HMM matter completely and the reduction of the IMM matter was 52-100%, depending on the type of the membrane studied. The enhancement of the reduction of the LMM matter ranged between 43-79%. The NF membranes studied removed generally over 60% of the remaining organic matter, measured as DOC and sum of peak heights in HPSEC, from the water after conventional treatment process. From the organic matter removal processes studied the water with lowest organic matter were obtained by NF.