Bioelectrochemical Recovery of Energy and Metals from Simulated Mining Waters 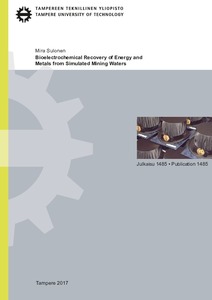 Extremely acidic water with high metal concentrations is often produced during mining and processing of sulfidic ores. Sulfur-oxidizing microorganisms contribute significantly to the acidification of the water streams and oxygen depletion by oxidizing reduced inorganic sulfur compounds (RISCs) — which are released to the mining waters during the processing of sulfide minerals — to sulfuric acid. The acidic water continues leaching metals from minerals and the metal concentrations thus further increase.

Certain metals can be recovered from acidic solutions by using them as the electron acceptor at the cathode of an electrochemical system. The metal ions accept electrons from an electrode and deposit on the surface of the electrode in pure elemental form. The electrical current required for the electrodeposition of metals is conventionally drawn from the oxidation of water. However, with the assist of electroactive microorganisms, biodegradable compounds can be used as the source of the required energy. Electroactive microorganisms oxidize a substrate and donate electrons to an anode electrode. The flow of electrons from anode to cathode creates electrical current, which can be utilized in the electrodeposition of the metals. As mining waters do not usually contain organic compounds, RISCs are promising substrates for the recovery of metals from mining waters — they are present in the same stream and can be oxidized at lower potential than water. In addition, with the electrochemical treatment both metals and RISCs could be removed from the water streams simultaneously.