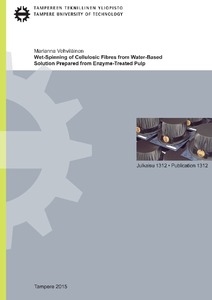 The demand for textile fibres is increasing constantly due to the growing population and improving standard of living. Currently, 64 % of the fibres produced globally are synthetic man-made fibres from oil-based raw materials, 29 % is cotton and the rest are man-made cellulosic fibres, wool and other natural fibres. The production of synthetic fibres and cotton cannot be increased in the future, thus creating a gap between the fibre demand and the production. One candidate to fill the gap is the viscose fibre which production covers currently 96 % of the man-made cellulosic fibres. However, the viscose process is challenging due to the occupational health and environmental issues relating to the use of carbon disulphide.

As a consequence, there is a need of such fibres that are made from the renewable resources (vs. oil), do not compete with the food production (as cotton) and do not need hazardous chemicals (as viscose).

This work introduces a new cellulosic fibre process which attempts to respond the need described. In the process, a dissolving grade wood pulp is treated with enzymes, dissolved in water-based solvent and regenerated to fibres using a wet spinning method. Thus the raw material is renewable, which growth does not use arable land, and the carbon disulphide needed in the viscose process is here replaced with enzymes.

Dissolution of the enzyme-treated pulp into aqueous sodium zincate and the regeneration of the solution into cellulosic fibres were demonstrated first. Thereafter, the preparation of the spin dope and the wet spinning of the fibres were studied in more detailed. The enzyme-treated cellulose was dissolved either by mixing-procedure or by freezing-thawing cycle. Both methods resulted in high quality solution for the spinning trials. However, the alkali ratio of the solution prepared by freezing-thawing cycle was lower (1.1 vs. 1.3) thus requiring less sulphuric acid during the coagulation. The spinneret draw ratio and the stretching ratio during the spinning exhibited negative correlation. This was due to the rapid coagulation of the solution. The coagulation rate decreased significantly when the sulphuric acid spin bath was replaced with an acetic acid bath. Equally, the stretching ratio of the fibres increased, but unexpectedly the tenacity of the fibres did not increase. It was found that the acetic acid spun fibres shrunk during the drying and thus the orientation gained during the stretching was lost.

Another route to modify the fibre properties was explored through the chemical modification of enzyme-treated cellulose with allyl glycidyl ether. The treatment resulted in the pulp with low amount of 3-allyloxy-2-hydroxypropyl groups (DSA 0.05) which had higher solubility in aqueous sodium zincate than the un-substituted enzyme-treated pulp. The 100 % solution from the modified pulp did not form fibres in acidic bath, thus the fibres were spun from the solutions containing 25 % and 10 % of the modified pulp. The 3-allyloxy-2-hydroxypropyl groups provide reactive C=C double bonds in the fibre structure, thus allowing the further functionalization to gain new properties for the fibres.

It was shown that the production of regenerated cellulosic fibres in an environmental manner is possible, thus providing one option to fill the gap between the fibre demand and the production in the following decades.