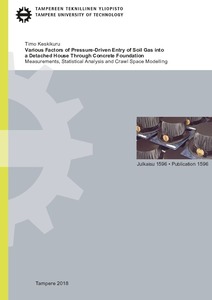 The effect of different factors on indoor radon

The impact of physical and meteorological factors on the rate of radon entry into a building were examined using linear regression analysis in seven houses with mechanical supply and exhaust ventilation. Explanatory factors were the indoor-outdoor pressure difference, the indoor-outdoor temperature difference, the wind direction and speed and, in two cases, changes in barometric pressure and rain. The coefficient of determination of the measured factors was not very high because the concentration and movement of radon in the soil is affected by several other factors. In the correlation analyses between pairs of variables at each site, the strength of the radon entry rate correlated strongly with both the indoor-outdoor temperature and pressure differences. Wind speed and direction also affected the radon entry rate in all the houses. In the case of houses which were built on a permeable esker, wind from certain directions increased radon entry. The highest coefficient of determination of indoor radon were found when the wind was perpendicular to the esker.

Changes in barometric pressure were examined using regression analysis, while the effect of rain was examined by covariance analysis in two houses, both with groundsupported concrete slab foundations. The change in atmospheric pressure was not a significant explanatory factor in these houses. According to the results, rain did not influence short-term variations in radon source strength in the houses.

Ventilation reduced radon concentrations effectively in all the houses examined, although this varied at each site. The supply and exhaust ventilation systems in the houses operated in accordance with the design guidelines at the time of construction, and produced a slight overpressure in the living spaces where there were supply air vents. The pressure difference was regulated without any technical faults by the pressure controlled mechanical ventilation of the houses. The usability of the pressure control 4 system was, however, restricted by the poor airtightness of the buildings. Thus, in nonairtight buildings, a fairly large difference in the supply and exhaust air volumes did not achieve desired changes in the pressure difference.

In two of the houses, the operation of the supply and exhaust ventilation systems and the air currents between the rooms were examined by using the perfluorocarbon tracer gas method (PFT method), and by measuring air volumes. According to the results of these measurements, about 40 - 65% of the supply air in the depressurised bathrooms came as air currents from the living areas, and the remainder came from leakage air from outside. The research confirmed previous findings that mechanical supply and exhaust ventilation works most effectively in airtight houses.

Studies on, and modelling of, crawl spaces

One case study involved a study of the microbiological, radon and VOC conditions in the crawl space and in the living spaces of a detached house before and after changes to the ventilation system. A crawl space pressurisation system using exhaust air from indoors was successful in preventing the convective flow of radon from the soil. However, the warm moist air that was blown into the crawl space produced favourable conditions for microbial growth, and increased concentrations of microbes were detected there.

Theoretically, a microbiologically safe crawl space was determined with a hygrothermal simulation utilizing the Finnish mould growth model. A simulation of a two-year period included a study of the temperature and humidity conditions as well as mould sensitivity in both open and closed ground structures of crawl spaces. As a new approach, in the mould model, depressurisation (-10 Pa) of the crawl space was used in the calculation of conditions for the mould model.

An open base of uncovered ground (gravel) in the crawl space of the first structure is airpermeable gravel. Two simulations were carried out using typical gravel permeability values (1x10-8 (m2) and 1x10-9 (m2)). In the second simulation the ground in the crawl 5 space was covered with four different materials (concrete, concrete+XPS, XPS and a plastic vapour barrier). It was assumed that these would prevent convective airflow via the ground and decrease the evaporation of moisture.

The simulation showed that a crawl space with an uncovered ground base (gravel) can be kept depressurised with moderate exhaust air ventilation when the soil's permeability value is either 1x10-8 (m2) or 1x10-9 (m2).

No mould growth was simulated in the examined structures with different air change rate values when the building material’s mould growth sensitivity was estimated to be class 3 (medium resistant; concrete, etc.). An open uncovered gravel base is only a functional solution for a crawl space when there are no organic materials. Gravel permeability of 1x10-8 (m2) can be regarded as an effective alternative to an open base structure.

When the mould growth sensitivity was set to the class 1 level (very sensitive: pine wood, etc.) as it is for air-sealed covered ground, the recommended ground structure is concrete + insulation with an air change rate of 0.2 to 1 h-1 for exhaust air. The simulation showed that a concrete ground structure with an air change rate of 0.2 to 0.6 h-1 was also very effective. Concrete structures have the lowest mould-risk index due to concrete's moisture absorption capacity, but the Mould index rises if the air change rate is above the recommended level. The simulation showed that XPS insulation and ground covered with a plastic vapour barrier were not suitable due to their high Mould index.