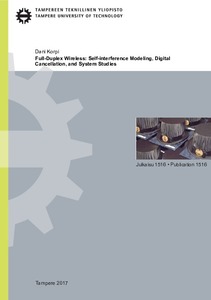 In the recent years, a signiﬁcant portion of the research within the ﬁeld of wireless communications has been motivated by two aspects: the constant increase in the number of wireless devices and the higher and higher data rate requirements of the individual applications. The undisputed outcome of these phenomena is the heavy congestion of the suitable spectral resources. This has inspired many innovative solutions for improving the spectral efficiency of the wireless communications systems by facilitating more simultaneous connections and higher data rates without requiring additional spectrum. These include technologies such as in-phase/quadrature (I/Q) modulation, multiple-input and multiple-output (MIMO) systems, and the orthogonal frequencydivision multiplexing (OFDM) waveform, among others. Even though these existing solutions have greatly improved the spectral efficiency of wireless communications, even more advanced techniques are needed for fulﬁlling the future data transfer requirements in the ultra high frequency (UHF) band, which is perhaps the most congested piece of the spectrum. To this end, wireless inband full-duplex (IBFD) communications has recently been proposed as another step towards the full utilization of the spectral resources. What IBFD simply refers to is simultaneous transmission and reception on the same frequency band within the same device, meaning that the spectral efficiency is in theory doubled. Considering the cost of the radio frequency bands from a teleoperator’s perspective, IBFD can therefore provide savings in the order of hundreds of millions while also easing the congestion of the UHF and lower bands. Hence, implementing and employing radio transceivers capable of IBFD communications is a highly tempting vision.

Firstly, this thesis concentrates on solving the greatest challenge in wireless IBFD communications: the self-interference (SI). In particular, SI refers to the interference produced by the own transmitter, which is directly coupling to the receiver. Since the transmitted and received signals within an IBFD transceiver are fully overlapping in the frequency domain, conventional duplex ﬁltering is of no use in suppressing the SI, and hence advanced techniques are needed for canceling it. The required SI cancellation solutions can therefore be considered the cost of the improved spectral efficiency. To this end, this thesis ﬁrst identiﬁes which of the radio circuit impairments must be considered when modeling and canceling the SI within an IBFD transceiver. Especially, the nonlinear distortion produced by the transmitter power ampliﬁer is shown to be one of the dominant impairments. These ﬁndings are then used as a basis for developing SI cancellation algorithms operating in the digital domain of the receiver. To achieve sufficiently high modeling accuracy, the proposed digital SI cancellers take into account the effects of the analog impairments that distort the SI signal while it is propagating to the receiver. As a result, the SI signal models derived in this thesis are some of the most comprehensive reported in the literature. In addition, two alternative schemes are presented for efficiently estimating the necessary parameters needed for regenerating the SI signal.

The proposed digital cancellation algorithms are then evaluated by utilizing them in an actual IBFD prototype, which contains also other SI suppression mechanisms operating in the analog domain. The obtained measurement results show that, with the help of these digital SI cancellers, the SI can be cancelled almost perfectly, proving that true IBFD operation is indeed possible. In particular, having canceled the SI completely, the receiver will experience no additional interference produced by the simultaneously operating transmitter, and hence the overall data rate can be doubled without introducing any additional spectral resources. Altogether, the own transmit signal is shown to be suppressed in some cases by more than 100 dB, which is one of the highest reported SI cancellation performances to date.

Secondly, this thesis also provides a comprehensive system level analysis of a network with an IBFD-capable access node. Especially, it is assumed that the access node serves legacy half-duplex downlink and uplink mobile users simultaneously on the same frequency band while also using the same spectral resources for backhauling all the data wirelessly. The system is analyzed in terms of solving the optimal transmit power allocation under minimum data rate requirements. By comparing the IBFD access node to two reference scenarios where either all or some of the communication tasks are divided in time, it is shown that the IBFD capability is highly beneﬁcial in many respects. This indicates that the gains of the IBFD technology can be realized to some extent even when most of the devices are only half-duplex capable.

Altogether, the ﬁndings of this thesis show that wireless IBFD communications is indeed possible in practice, as long as all the signiﬁcant analog impairments are considered in the digital SI cancellation stage. Moreover, guidelines for implementing IBFD transceivers under practical constraints are provided while also demonstrating that the IBFD technology results in various network-level beneﬁts. These results pave the way towards the commercial deployment of IBFD radio transceivers.