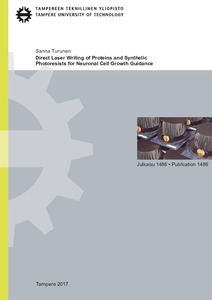 In vitro cell culture platforms are important tools for the study of neural functions in health and disease. The formation of controlled neuronal networks increases the robustness of the results, which facilitates the transition of the results to in vivo. Controlled cell growth on predefined axes can be achieved via chemical or topographical cues, such as the microscale patterns of celladhesive peptides or physically confining 3D microstructures. Computer-assisted laser-based fabrication techniques such as direct laser writing by two-photon polymerization (2PP-DLW) offer a versatile tool to fabricate such controlled cell culture platforms with highly ordered geometries in the size scale of natural 3D cell environments. 2PP-DLW is a sequential fabrication technique based on the phenomenon of two-photon absorption (2PA) by photoinitiator molecules, which initiates radical chain-growth polymerization that converts small, unsaturated monomer molecules from a liquid state to solid macromolecules. The 2PP-DLW technique allows the fabrication of complex features including internal walls, overhangs, or tortuous channels with feature sizes in the µm and sub-µm range.

In this thesis, 2PP-DLW was used to fabricate microscale chemical and topographical guidance cues for neuronal cells. The main goal was to find appropriate photosensitive materials for the microstructures, to optimize the 2PP-DLW processing parameters for different materialphotoinitiator combinations, and to design and fabricate several novel microstructures to be tested with human pluripotent stem cell (hPSC)-derived neuronal cells. As hPSCs can be differentiated into several cell types, such as neurons, astrocytes, and oligodendrocytes, they offer a promising cell source for cell culture models. Overall, four different custom-built 2PP-DLW fabrication setups based on either Nd:YAG or Ti:sapphire lasers were used for the polymerization experiments. First, the processability of photosensitive custom-synthetized methacrylated poly(caprolactone) oligomer (PCL-o) and commercial poly(ethylene glycol)diacrylate (PEGda) were studied together with Irgacure®127 photoinitiator. Although both PCL-o and PEGda could be successfully fabricated into simple microstructures with a picosecond Nd:YAG laser, the PCL-o required the use of very slow scanning speed in order to achieve complete polymerization. Thus, it was concluded that the fabrication of larger or more complex structures from PCL-o was not feasible. The inability of PEGda and PCL-o to support the migration or functionality of neuronal cells make them therefore poor candidates for cell culture purposes.

Next, avidin and biotinylated bovine serum albumin (bBSA) proteins together with flavin mononucleotide (FMN) photosensitizer were fabricated into surface patterns using several protein concentrations in combination with different average laser power and scanning speed values to determine the range of fabrication conditions suitable for protein crosslinking. It was demonstrated that the bioactivity of proteins is retained during the exposure to the high laser intensities required for photocrosslinking with the Nd:YAG laser. Avidin and bBSA together with Irgacure® 2959 photoinitiator were also photocrosslinked into 2D single neuron guidance patterns, functionalized ii
with extracellular matrix-derived peptides, and used for the study of cell growth guidance with hPSC-derived neuronal cells for 14 days. As several difficulties were encountered during the fabrication of the protein patterns and cell culture experiment, proteins were excluded from any further studies and replaced with the commercially available hybrid polymer-ceramic Ormocomp® that possesses superior photocrosslinking properties.

Ormocomp® combined with Irgacure®127 was fabricated into 3D confinement microstructures and 3D tubular microtowers with or without intraluminal guidance cues. The applicability of the confinement structures to control the location of neurons and to direct the growth of neurites on predefined axes was evaluated during the cell culture experiments. The functionality of three different microtower designs for the long-term 3D culturing of human neuronal cells and their ability to orient neurites was assessed with a four-week cell culture study. The observations achieved in this thesis support the use of the microtower-based platform for long-term cell culture as the microtowers were proven to facilitate neurite orientation and 3D network formation via suspended neurite bridges. Thus, the proposed microstructure-based culturing concept could in future be used as a substitute for the hydrogel matrices commonly used to mechanically support the formation of 3D cell networks.