Synthesis of nanoparticles and preparation of deposits by liquid flame spray 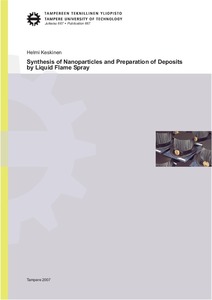 There is currently immense interest in flame-generated particulate materials, and various hi-tech applications are benefiting from the great strides in development. This thesis work concentrated on the production of several single-component and composite nanoparticles and nanoparticle deposits by the flame method known as Liquid Flame Spray (LFS). In this method, the liquid precursor is atomized as micron sized droplets into a high temperature (~3000 K) hydrogen/oxygen flame, using one of reactant gases as the atomizer. The particle production rates ranged from 0.02 to 120 g/h, and the particle sizes were in the range of ~2-60 nm.


The nanoparticles and nanoparticle deposits produced in line with the work described in this thesis possess a real potential for many technological applications, such as: catalysts, self-cleaning surfaces, capacitors, and antibacterial surfaces. The scale-up of nanoparticle and deposit production from the laboratory for use in real technological applications demands a comprehensive understanding of particle synthesis in the flame. The first objective of this thesis involved gaining a thorough understanding of the particle generation process. The produced deposits were then tested for photocatalytic functionality. Photocatalytically active surfaces have been associated with desirable products like, for instance, self-cleaning windows and air/water purification systems.


Metallic silver, palladium, and silver/palladium alloy nanoparticles were successfully produced by LFS. Deposits consisted of a few nanometers silver particles were also generated. Metal salts (in water or in alcohol) were used as precursors. The water-based precursors are independent of the combustion process, while the combustion energy of the flame is increased due to the alcohol-based precursors. The inorganic precursors were almost completely evaporated in the flame. During the natural cooling along the flame, the particles nucleated and grew in accordance with typical aerosol growth processes. The resulting metallic particles were observed to be spherical. When nanoparticles were produced, the particle size was controlled by adjusting the particle production rate. The size of the silver particle deposits was also related to the deposit collection distance and time.


Nanoparticles containing iron were produced by LFS, from metal salt and water precursors, were also studied in this thesis. The particles increased in size according to the particle production rate, and consisted of pure iron, hematite, and magnetite the majority being of geometrical morphology.


The capacity of LFS to produce ceramics such as silica and titania, using metal-organic precursors in alcohol solution, was also investigated. As with the silica particle production, also the computational fluid dynamics (CFD) was used to model the flame temperature, species vapor concentration, and saturation ratio and particle formation in the flame. The particles resulting after the flame were agglomerates. As expected, the primary and agglomerate size of the ceramic nanoparticles also increased with the particle production rate. At lower liquid feed rates, hard agglomerates were synthesized. In the titania studies, at higher particle production rates (associated with higher liquid feed rates) the soft agglomerates were generated. The titania particles consisted of anatase and rutile.


Finally, the principal part of this study involved titania and titania/silver deposit production, by collecting the deposits both inside and just after the flame. The titania/silver deposits were made by both the one- and two-step methods. The deposits where collected on glass and steel substrates, and consisted of tens-of-nanometer sized titania agglomerates encrusted by independent few-nanometer sized silver particles. The functionality of the deposits as photocatalysts was tested by means of Deinococcus geothermalis biofilm killer and stearic acid decomposition on surfaces under UV-illumination. While all the produced surfaces were active, the flame made one-step titania/silver deposit has the highest potentiality as photocatalyst.


In summary, single component metallic or ceramic nanoparticles, and composite metal/metal and ceramic/metal deposits were successfully produced. As well as, the silver, titania and titania/silver deposits were synthesized. The functionality of these titania and titania/silver deposits as photocatalysts was also demonstrated. However, from all of the studies in this thesis, one specific challenge concerning the nanoparticle production remains: even though the precursor evaporation was agreed to be effective, some incomplete precursor evaporation was still observed. This process leads to the formation of some larger residual particles, and especially when used at higher production rates (for technological applications) or at lower ones (for thin film applications), this will pose a problem that must be solved. Key issues to address this include perfect atomization and more easily processed precursors. In the future also the health effects during and after production of these nanoparticles or deposits must be investigated.