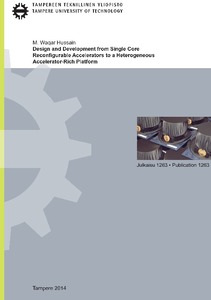 The performance of a platform is evaluated based on its ability to deal with the processing of multiple applications of different nature. In this context, the platform under evaluation can be of homogeneous, heterogeneous or of hybrid architecture. The selection of an architecture type is generally based on the set of different target applications and performance parameters, where the applications can be of serial or parallel nature. The evaluation is normally based on different performance metrics, e.g., resource/area utilization, execution time, power and energy consumption. This process can also include high-level performance metrics, e.g., Operations Per Second (OPS), OPS/Watt, OPS/Hz, Watt/Area etc. An example of architecture selection can be related to a wireless communication system where the processing of computationally-intensive signal-processing algorithms has strict execution-time constraints and in this case, a platform with special-purpose accelerators is relatively more suitable than a typical homogeneous platform.

A couple of decades ago, it was expensive to plant many special-purpose accelerators on a chip as the cost per unit area was relatively higher than today. The utilization wall is also becoming a limiting factor in homogeneous multicore scaling which means that all the cores on a platform cannot be operated at their maximum frequency due to a possible thermal meltdown. In this case, some of the processing cores have to be turned-off or to be operated at very low frequencies making most of the part of the chip to stay underutilized. A possible solution lies in the use of heterogeneous multicore platforms where many application-specific cores operate at lower frequencies, therefore reducing power dissipation density and increasing other performance parameters. However, to achieve maximum flexibility in processing, a general-purpose flavor can also be introduced by adding a few Reduced Instruction-Set Computing (RISC) cores. A power class of heterogeneous multicore platforms is an accelerator-rich platform where many application-specific accelerators are loosely connected with each other for work load distribution or to execute the tasks independently.

This research work spans from the design and development of three different types of template-based Coarse-Grain Reconfigurable Arrays (CGRAs), i.e., CREMA, AVATAR and SCREMA to a Heterogeneous Accelerator-Rich Platform (HARP). The accelerators generated from the three CGRAs could perform different lengths and types of Fast Fourier Transform (FFT), real and complex Matrix-Vector Multiplication (MVM) algorithms. CREMA and AVATAR were fixed CGRAs with eight and sixteen number of Processing Element (PE) columns, respectively. SCREMA could flex between four, eight, sixteen and thirty two number of PE columns. Many case studies were conducted to evaluate the performance of the reconfigurable accelerators generated from these CGRA templates. All of these CGRAs work in a processor/coprocessor model tightly integrated with a Direct Memory Access (DMA) device. Apart from these platforms, a reconfigurable Application-Specific Instruction-set Processor (rASIP) is also designed, tested for FFT execution under IEEE-802.11n timing constraints and evaluated against a processor/coprocessor model. It was designed by integrating AVATAR generated radix-(2, 4) FFT accelerator into the datapath of a RISC processor. The instruction set of the RISC processor was extended to perform additional operations related to AVATAR.

As mentioned earlier, the underutilized part of the chip, now-a-days called Dark Silicon is posing many challenges for the designers. Apart from software optimizations, clock gating, dynamic voltage/frequency scaling and other high-level techniques, one way of dealing with this problem is to use many application-specific cores. In an effort to maximize the number of reconfigurable processing resources on a platform, the accelerator-rich architecture HARP was designed and evaluated in terms of different performance metrics. HARP is constructed on a Network-on-Chip (NoC) of 3x3 nodes where with every node, a CGRA of application-specific size is integrated other than the central node which is attached to a RISC processor. The RISC establishes synchronization between the nodes for data transfer and also performs the supervisory control. While using the NoC as the backbone of communication between the cores, it becomes possible for all the cores to address each other and also perform execution simultaneously and independently of each other.

The performance of accelerators generated from CREMA, AVATAR and SCREMA templates were evaluated individually and also when attached to HARP's NoC nodes. The individual CGRAs show promising results in their own capacity but when integrated all together in the framework of HARP, interesting comparisons were established in terms of overall execution times, resource utilization, operating frequencies, power and energy consumption. In evaluating HARP, estimates and measurements were also made in some advanced performance metrics, e.g., in MOPS/mW and MOPS/MHz. The overall research work promotes the idea of heterogeneous accelerator-rich platform as a solution to current problems and future needs of industry and academia.