Rheological characterization of polymer melts in shear and extension : measurement reliability and data for practical processing 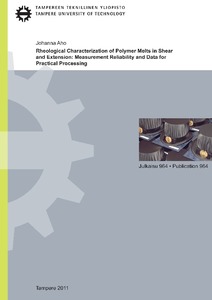 In order to manage the processing of polymers one needs to understand and be able to quantify the rheological phenomena occurring in complex flows of viscoelastic materials. Knowledge on rheological behavior of polymers is needed for setting the right process window, such as temperature and flow rate. In addition, rheological data is needed for process simulation, which is increasingly adapted as an important part of new process setup. Rheological properties of the polymer melt are of particular importance in flow modeling. Despite their importance, shortcuts in rheological measurements are often taken, which can lead to inaccurate or incorrect results.
The scope of the study was to add knowledge on the importance of different rheological properties of polymers regarding melt processing, to improve their measurement techniques and discuss possible errors in experiments. The focus of the work was on selected subjects important in polymer processing, the emphasis being on injection molding: measuring and modeling of polymer melt viscosity at low temperature and shear rates, pressure dependence of viscosity, and extensional viscosity. In addition, rheological data measured using an injection molding machine and a slit die were reported. Secondly, the correct way of performing experiments, measurement accuracy and correct data analysis were discussed in capillary rheometer measurements and uniaxial extensional viscosity measurements.
The results of Publication I showed that generalized Newtonian fluid (GNF) models, such as Carreau-Yasuda equation, were able to describe the viscosity function accurately for the studied amorphous polymers over the flow phases relevant in injection molding – high temperature and high shear rate, as in filling, or low shear rate and low temperature, as in packing. Dynamic oscillatory experiments at low temperatures showed a tendency towards an apparent 2nd Newtonian plateau at high angular frequencies.
Publication II discussed the correction of entrance pressure drop in capillary rheometry: an orifice die proved to offer a convenient short-cut for evaluating the entrance pressure drop, but the conical expansion area of the commercial design used here requires a correction for the additional pressure drop caused by the adhesion of the melt to the wall of the expansion area.
Publication III confirmed that the pressure dependence of viscosity, studied for several polymers, increases with increasing complexity. At lower temperatures, close to the glass transition temperature, the effect of pressure on viscosity is more pronounced, hence the test temperature must be taken into account when pressure dependence of viscosity for different polymers is compared.
Publication IV examined the experimental and analytical practice and errors in uniaxial extension experiments by Sentmanat extensional rheometer (SER). Modifying the calculation by taking into account the changes in sample geometry due to thermal expansion and pre-stretching, more exact results were achieved. As one important outcome of this study, an option for taking into account the geometrical error related to the thermal expansion was made in the software provided by the rheometer manufacturer Anton Paar, to be used in conjunction with SER.
A combination of two methods for determining extensional viscosity at broad-extension rate range – considering injection molding simulation as a possible application – was studied in Publication V. Extensional viscosity could be achieved over a wide range of extension rates with relatively good accuracy by measuring it using SER and by evaluating it from contraction flow analysis on capillary rheometry data. Moreover, the molecular stress function (MSF) model could be used to predict the extensional behavior in case where scarce experimental data is available.
Rheological measurements of polymer melts under actual processing conditions, using an adjustable slit die coupled to an injection molding machine, were reported in Publication VI, comparing them to low and moderate shear rate data achieved by conventional off-line rheometers. The viscosity results achieved by the slit die measurements correlated very well with the off-line data, demonstrating the usefulness of a low-cost, easy and fast operation device as a rheological tool. In addition, measurements with three different slit sizes showed a good superposition verifying the absence of wall slip.