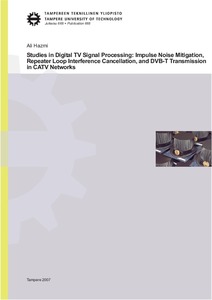 
Hazmi, A.
Tampere University of Technology

The Digital Video Broadcasting Project (DVB) is a multinational initiative to standardize digital broadcasting worldwide. It produces different system specifications including satellite: DVB-S, cable: DVB-C, terrestrial: DVB-T, and others. The DVB-T system for terrestrial broadcasting is probably the most complex DVB delivery system. It is proven a worldwide success. It has become the de facto world standard for transmitting digital terrestrial television. Originally, the DVB-T standard was created for fixed and portable reception as the main application areas. However, to remain successful, continual assessment and enhancement are needed to mitigate any perceived deficiencies in the performance of the standardized techniques. In addition, competition with other Terrestrial Digital TV standards (ATSC-8VSB and DiBEG-ISDBT), and aims to target new potential services based on hand-held battery powered devices such as mobile telephones, PDAs, etc., have motivated further improvements of the standard. This thesis addresses enhancements of the DVB-T system. Three main issues are considered.


In the first part, we investigate the tolerance of the DVB-T system to impulsive noise. Impulse interferences can be produced by ignition sparks from vehicles or various household appliances. DVB-T has been shown to have reception difficulties in the presence of impulse noise, mainly when using higher constellations for high data rates. A new method for compensating the effects of impulse noise in the OFDM based DVB-T systems is described. The scheme uses channel estimation pilots for the estimation and cancellation of impulse noise. The results show that the system performance can be improved significantly using the introduced method. In the time-frequency selective fading channel, further measures are needed. We present an enhanced channel estimation scheme for the developed impulse noise cancellation method to overcome its sensitivity to the Doppler spread and fading impairments. Additionally, a simple and practical impulse burst position detection method is presented. Combinations of the introduced methods with other existing techniques are studied. Effects of impulse interferences on DVB-T receiver synchronization are also discussed.


In the last part, inter-operability issue of the DVB-T standard is considered. We study the quality of the terrestrial digital video broadcasting (DVB-T) transmission over the cable TV network. Usually, when terrestrial digital TV signals are distributed in the cable TV network, a conversion is needed in the head-end from DVB-T to DVB-C. We study the possibility of using the DVB-T signal without any conversion. We demonstrate the sensitivity of the OFDM system for the phase noise effects by using a dynamic model for CATV channel. Then, we conclude by giving the specifications which a CATV network should satisfy to allow DVB-T transmission with sufficient quality.