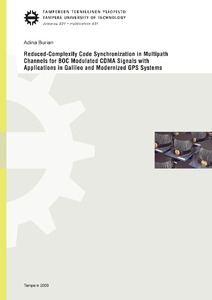 
Burian, A.
Tampere University of Technology

Applications for the new generations of Global Navigation Satellite Systems (GNSS) are developing rapidly and attract a great interest. Both US Global Positioning System (GPS) and European Galileo signals use Direct Sequence-Code Division Multiple Access (DS-CDMA) technology, where code and frequency synchronization are important stages at the receiver. The GNSS receivers estimate jointly the code phase and the Doppler spread through a two-dimensional searching process in time-frequency plane. Since both GPS and Galileo systems will send several signals on the same carriers, a new modulation type - the Binary Offset Carrier (BOC) modulation, has been selected. The main target of this modulation is to provide a better spectral separation with the existing BPSK-modulated GPS signals, while allowing optimal usage of the available bandwidth for different GNSS signals. The BOC modulation family includes several BOC variants, such as sine BOC (SinBOC), cosine BOC (CosBOC), alternate BOC (AltBOC), multiplexed BOC (MBOC), double BOC (DBOC) etc. The BOC-modulation triggers new challenges in the acquisition and tracking processes, since the receiver can acquire and lock incorrectly on a side-lobe peak around the maximum peak of the correlation envelope. Reliable receiver positioning requires accurate estimation of Line-of-Sight (LOS) propagation delays from different satellites to the receiver. The propagation over wireless channel suffers adverse effects, such as the environmental effects, the presence of multipath propagation, high level of noise, partial or full or obstruction of LOS component, especially in indoor environments. The synchronization process becomes even more challenging in such conditions.
The research results presented in this thesis focus on acquisition and tracking algorithms for Galileo and modernized GPS signals, analyzed in the context of BOC modulations, for various static and fading multipath profiles. Also, the effect of bandwidth limitation at various stages of the receiver was considered.
First, the performance at signal acquisition stage was analyzed, by considering the impact of different receiver constraints and acquisition parameters. A comprehensive analysis of the choice of detection and false alarm probabilities at each stage of a double-dwell structure, for a realistic Galileo signal was performed, and the conditions under which a double-dwell structure is better than a singledwell structure were discussed. The design of bandwidth-limiting receiver filters and the effect of the transition band, in the context of signal acquisition, were studied. It was shown that the performance (in terms of root mean square error) can be improved by using an asymmetric transition band between the passband and stopband frequencies. Also the effects of over-sampling on BOC-modulated pseudo-random codes during the code acquisition process were analyzed and it was proven that sufficient performance can be achieved if the code-Doppler bin size is designed properly.
The next results presented in this thesis concentrate on eliminating the BOC generated ambiguities by removing the effect of sub-carrier modulation using one or a pair of single-sideband correlators. These techniques have the advantage that they allow the use of a higher step of searching the timing hypotheses compared with the ambiguous situation. Compared to other existing similar approaches, the three methods proposed in this thesis provide a less complex implementation and they can be generalized to every even and odd BOC modulation order. Also, the complexity of different unambiguous BOC processing methods was studied, taking into account both correlation and sideband selection in the receiver, when different filtering structures are considered.
Another part of this work focus on the tracking stage, where a new unambiguous approach, the Sidelobes Cancelation Method (SCM) was introduced. In order to remove or diminish the side-peaks threat, the SCM technique can be applied alone or in conjunction with other various tracking structures. This technique removes the threat brought by the side-peak ambiguities, while keeping the same sharp correlation of the main peak and, thus, it allows for better tracking performance. Moreover, if the search step of time uncertainty is kept sufficiently small, the SCM approach was also proved to be beneficial at acquisition stage. In contrast to other methods already introduced in literature for the same purpose, the SCM has the advantage that it can be used with any BOC-modulated signal. In order to cope with the side-peak ambiguities, a separate correlation function is computed and stored in the receiver and the delay estimation is done according to this stored correlation function.
The last part of this thesis includes a collection of nine original publications that contain the main results of the author’s research work. New algorithms and architectures for the code acquisition and tracking in static and multipath fading channels were introduced and their performance was studied under various scenarios.