3D Component Method Based on the Rakes 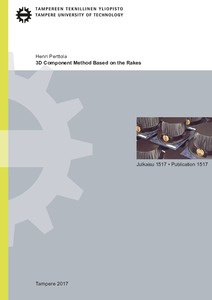 There are not practical design tools adequately available for the three-dimensional (3D) modelling and analysis of the structural steel joints. Especially, the missing guidance given in the standard has negative influence on the engineering practice. A motive for this research is to develop the analysis technique for the 3D design of the steel joints. The basic idea is to decompose the analysed joint into the key components, which play the essential role in the joint response to the given loads, and to replace it with a mechanical system, which comprises these components. A component ideology of this kind is in accordance with the component method introduced in EC3 (Section 6 of EN1993-1-8), which includes no instructions for 3D design of joints. However, there are no obstacles to employ the component ideology in the joint analysis whether the mechanical model describes the one-, two- or three-dimensional response. In this thesis, the component method of EC3 is the starting point for the development of the analysis tools for the 3D design of joints. The main objective is to show that the suggested 3D model defined in compliance with the component ideology can be used to the resistance prediction. A mechanical model of the suggested type also offer a method for determining of the interaction curves based on structural analysis rather that fitting procedures. The stiffness and ductility aspects are considered as secondary or complementary issues in this work. This is due to the weaknesses inherited from the prevailing component method of EC3 related to formulations on the component stiffness and ductility.

In the 3D modeling and analysis, the focus of the research is in the response of the bolted end plates in the tension zone of a joint. The end plates are typically flanges, which transfer the tension over the joint between the connected members. The bolt acts as tension bolt whilst the end plate has a character of the plate in bending. The bolted end plate connection can be used in many types of joints like beam-to-column joints, beam and column splices and column bases. Because the bolted end plate is meant to transfer tension in the perpendicular direction of the end plate, the shear in the connected member is restricted outside the scope of this thesis. The splices of a rectangular tube, equipped with the rectangular end plates, are considered as driving examples in all parts of the thesis. The four-bolt layouts such that the bolts are either symmetrically placed corner bolts or mid-side bolts in the flanges were studied. The main attention is paid to the end plated connections with corner bolts whilst the end plate with mid-side bolts can be seen as a reference case. The resistances of the bolted end plates are derived by the yield line theory in accordance with the upper bound theorem of the plasticity theory such that this procedure is embedded in the determination of the resistance of the bolted end plate based on EC3.

The 3D component method was investigated by analyzing the end-plated splices of the rectangular tube under biaxial bending, which stand for a genuine three-dimensional problem not reducible in the lower dimensions. The related task was to assemble a mechanical system of components replacing with the considered splice and solve the problem. The compression components are much stiffer in comparison with the tension components such that only the location of the resultant force in the compression zone is decisive. Thus, the properties of the tension components are in the main role in the splice behaviour. In order to study the validity of the computed results, the test series was arranged on the tube splices under weak axis and biaxial bending. The experimental validation data was enlarged to the case of the arbitrary biaxial bending through the numerical analyses supported by the tests. The splices used as the specimens in the tests corresponds the driving examples. In addition to the main objective, which was the resistance prediction by the 3D component method, the physical character of the response of the considered end-plated rectangular tube splice is investigated experimentally and numerically. The arranged tests on tube splices have an inventive character and no biaxial joint tests like them have not been done before. In the numerical analysis on the considered splices, the described nonlinear features were the plastic material behavior including strain hardening, contacts between the end plates and geometrically nonlinear description of the deformations in the strongly bent end plate and in the bolt when necking. Some of the complementary results based on numerical simulation are described only in the appendices of the thesis.