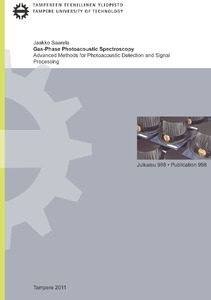 Photoacoustic spectroscopy (PAS), as a branch of optical spectroscopy, is an established, robust, and sensitive method for trace gas monitoring. The concentration of a specific gas compound, among many other physical properties, can be revealed by using photoacoustics. In the photoacoustic (PA) effect modulated light is absorbed by the gas. The energy of the absorbed light is converted to sound due to an increase in the temperature and pressure of the gas. The induced sound waves are detected with a microphone. In the trace gas detection the sensitivity of the PA sensor is a crucial parameter, which affects the reliability of the measurement. In this work, new photoacoustic measurement and signal processing techniques are developed for the detection of three gaseous components: the greenhouse gas carbon dioxide, the atmospheric pollutant nitrogen dioxide, and the anesthetic agent propofol.
Carbon dioxide was used as a target gas in a research where different wavelength modulation waveforms were studied for the use in tunable diode laser PAS. The selection of the waveform and amplitude affect the sensitivity of the measurement. In addition, slow tuning of the laser can reduce the performance of the PA system. A novel shaped waveform was introduced which gives an enhanced sensitivity and which is less prone to the delayed wavelength tuning of the laser.
Three of the publications included into this thesis deal with nitrogen dioxide detection using a new type of microphone that was recently introduced for the PA method. The transducer is an electromechanical ﬁlm microphone (EMFIT) whose sensitivity is comparable to those of the traditional microphones but, in addition, has an extremely broadband acoustic response, which is especially useful in PAS at high signal frequencies. The films can be layered and formed to different shapes for easy integration into all kinds of PA sensor designs. The films are also cheap so that low-cost but sensitive PA sensors can be realized. It was shown that the EMFIT films can be used for the detection of nitrogen dioxide in simple and cost-effective PA sensors which nevertheless are highly sensitive. The best limit of detection for nitrogen dioxide using low-cost light-emitting diodes as light sources is 10 ppb, and it was demonstrated in this thesis.
Photoacoustic detection of gas-phase propofol was demonstrated for the first time. Using pulsed PAS, a detection limit of 0.12 ppb was achieved which is well below typical propofol concentrations in patients’ exhaled breath during surgical procedures.