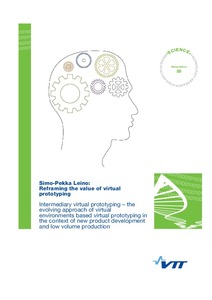 This problem was approached from the science base by formulating an expanded theory framework for value modelling, and from the problem base by an empirical case study in one manufacturing company. The research approach was constructive and exploratory.

This research contributed to engineering design science by conceptualizing virtual prototyping in the context of product design and development expanding to the dimensions of human factors and management theory. Thus, the contribution is also manifested by constructing the expanded theory framework for virtual prototyping value modelling in four dimensions with causal justification from virtual reality technology to business value elements which led to the new concept of Intermediary Virtual Prototyping (IVP). The discussed concept of IVP underscores the many layers from technical advantages of virtual reality to the expanded mediating object of product development activity system.

The discussion was carried on from the perspective of a partially configurable products and manual work-intensive variant production mode. This perspective is novel compared to the majority of virtual prototyping and virtual environments literature. It is proposed that IVP is particularly beneficial in this context, where human skills and knowledge contribute to the flexibility of production system.

IVP should be considered as a strategic investment that will produce income in the long run. IVP contributes to the co-creation and variant production paradigms by involving human creativity at an early product design and development phase, thus increasing flexibility. IVP creates value in use, but in turn it impacts the company in all the four dimensions mentioned.