Differences in Organizational Cultures - A Challenge for IT Projects 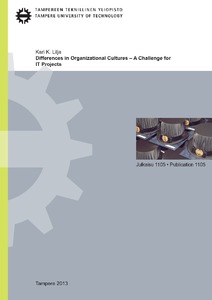 Five different studies were conducted to approach the impact of differences in business cultures between customer and supplier on the success of an IT project: a literature review, case study, complementary study to the case study, Delphi-based study for experienced experts, and an open survey for grassroots users. The results of each study were consistent with each other and proved that differing organizational cultures must be taken into account when setting, planning and managing an IT project. The impacts of differences can be both positive and negative. Special attention should be paid to those differences and organizational characteristics that have been experienced as having mostly negative affects. These characteristics were

A list of questions to be asked and activities to take part in was produced during the Delphi process in order to find out if there were differences that should be paid more attention to during the different phases of project.

According to the case study, differences in the size and structure of the organization, different juridical forms or form of ownership and differences in corporate relationships or in styles of using power have their impacts on co-operation. The unexpected finding that dividing tasks according to gender might be a risk factor highlighted a need to study the equality policy and situation in firms included in the case study. In this complementary study, a weak correlation between an organization’s official equality policy and the success of an IT project was found.

In addition to the themes named above, the Delphi-based survey conducted in 2010 highlighted two other themes: differences in understanding time, and the importance of a common language. An open survey, conducted in 2011 among the end users and grass-root workers involved in IT projects, confirmed the earlier findings and highlighted the importance of prompt and understandable communication, management’s involvement in the project, respect of common goals and timetables, and a clear and transparent hierarchy and command chain on both sides.