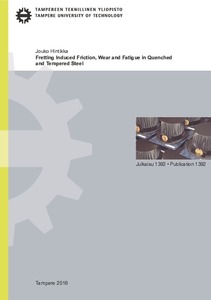 Fretting stands for reciprocating surface sliding with a typical sliding amplitude of a few tens of micrometres and a potential outcome of fretting fatigue and fretting wear. Fretting efficiently nucleates surface cracks, which may then continue to grow under cyclic loads and may ultimately lead to fretting fatigue failure. Uncertainties about fretting-induced surface degradation, wear, and frictional behaviour make the design of highly loaded contacts a challenging task.

This thesis aims to improve the understanding of fretting wear, fretting fatigue, and especially frettinginduced frictional behaviour. Fretting experiments were conducted with a pre-existing sphere-on-plane fretting apparatus and with an annular flat-on-flat fretting apparatus, the latter designed and built from scratch. Quenched and tempered steel specimens were fretted against themselves and against aluminium bronze.

Frictional behaviour was dominated by so-called non-Coulomb friction, which was related to initial adhesive wear damage and material transfer, which again led to a formation of tangentially interlocked protrusions and depressions and inclined sliding conditions. In the long run, the wear behaviour changed, because the interface started to fill up with entrapped loose wear debris, which reduced further wear via velocity accommodation mechanisms.

Fretting fatigue cracking of quenched and tempered steel occurred mostly near the gross sliding threshold. Analysis of loading conditions revealed that quenched and tempered steel was especially susceptible to cracking when fretted against aluminium bronze, which was explained by the pronounced formation of tangentially interlocked protrusion and depressions even in partial slip conditions. Individual tangentially interlocked protrusions and depressions were under a much greater cyclic load that what was predicted by nominal contact stresses, enabling crack initiation even though nominal fatigue stresses were below the fatigue limit.