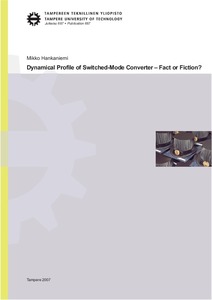 
Hankaniemi, M.
Tampere University of Technology
This publication is copyrighted. You may download, display and print it for Your own personal use. Commercial use is prohibited.

This thesis proposes a dynamical profile for a switched-mode DC-DC converter. The developed concept and definition of the dynamical profile is independent of the topology, conduction mode and control principle, as long as the regulated quantity remains the same. The profile consists of certain transfer functions that describe the dynamical properties of a single converter. The basis of the dynamical profile for the voltage-output converter is the modified g-parameter set and for the current-output converter the modified y-parameter set, respectively. In addition, two special admittance parameters that are important in the interaction analysis are also introduced. These parameters, forming the dynamical profile, mainly define how a switched-mode converter would behave as a part of an interconnected system and how it would affect the other subsystems. Consistent formalisms for evaluating the stability and performance of a converter imposed by the load and supply interactions are provided. It is shown that the interactions are mainly reflected via the open-loop parameters. The dynamical profile can be derived in two distinct ways; analytical modeling methods can be used or the transfer functions that characterize the profile can be measured.


The existence of the dynamical profile, for the voltage-output converters, is demonstrated by developing the profile for a buck converter with different control principles. Operations in discontinuous and continuous conduction modes are also discussed. It is noticed that the control method and operation mode strongly affect the dynamical properties. It is verified both analytically and experimentally that these properties can be easily deduced by studying the parameters of the profile. The dynamical profile for the current-output converters is also proposed. The profile can be derived by using conventional modeling methods or from the corresponding voltage-output-converter profile by applying duality. It is discovered that the dynamics of a current-output converter are totally different than in the corresponding voltage-output converter. The prevailing assumption has been that the current-output converter has a peculiar characteristic of increased gain crossover frequency, when using a low impedance load. This phenomenon is addressed to be due to a wrong control design and the use of a resistive load as the initial load.


As a conclusion, the introduced concept of the dynamical profile provides valuable tool and framework in analyzing and ensuring the performance and stability of a switched-mode converter, or any electrical device, as a part of a larger system. Its use can significantly save the design and prototype testing times and peculiar phenomena can usually be avoided. Several examples and aspects presented in the thesis explicitly prove that the unique dynamical profile of any given converter is a fact not a fiction.