Biohydrogen production in extreme conditions: A comprehensive study of the fermentative metabolism of a polyextremophilic bacterium 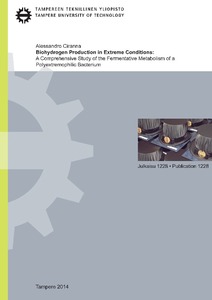 Dark fermentation is a potential carbon neutral process that exploits fermentative microorganisms to convert renewable organic substrates (e.g. lignocellulosic biomass and wastes) to H2, a non-fuel commodity and an ideal and clean energy carrier for replacing fossil fuels in the future. In the quest for developing a robust and efficient dark fermentative process for H2 production at industrial scale, the organism(s) selected to carry out the bioconversion is crucial. Thermophilic anaerobic bacteria have been drawing attention because they come close to meet the features that an ideal H2-producing organism should possess, including efficient breakdown and conversion of complex organic substrates to H2. In this study, a novel microorganism, Caloramator celer (former Thermobrachium celere), was evaluated for its potential to produce H2 from organic substrates.

C. celer is a strict anaerobic, alkalitolerant, thermophilic bacterium capable of converting glucose to H2, CO2, acetate, ethanol and formate by mixed acid fermentation. In addition, C. celer shows remarkable features such as an extremely elevated growth rates (doubling time of 10 minutes) and the ability to grow in extreme conditions (Topt= 67 °C; pH67°Copt= 8.2). For these reasons C. celer may be of industrial interest for the conversion of organic waste material to H2 in an open (non-sterile) bioprocess system. However, for a biotechnological exploitation of this bacterium for H2 production it is crucial to understand the factors that regulate carbon and electron flux and therefore the final distribution of metabolites to channel the metabolic flux towards the desired product.

The general goal of this study is to investigate the fermentative and energy metabolism of C. celer in order to understand how factors pertaining to the fermentation process can alter the metabolic fluxes. This is achieved by determining the relationship between fermentation conditions, physiological state, genome content, gene expression, metabolic fluxes and end-product yields through the combination of multiple methodologies such as conventional one-factor-at-a-time optimization, batch fermentations, comparative and functional genomics, transcription analysis and metabolic flux analysis. The final goal is to identify the optimal process conditions and metabolic state that maximize the H2 production from C. celer.

In this study, glucose fermentation of C. celer was characterized in controlled and non-controlled cultivations and the effect of several parameters on growth and fermentation of C. celer was investigated to identify the optimal conditions for H2 production. In addition, the inhibitory effect of high concentrations of substrate and soluble end-products on growth and H2 production was studied to assess the robustness of C. celer. The whole-genome sequence provided valuable information for interpretation of experimental results and for directing experimental design. Genomic data were employed to design transcriptional analysis, construct a stoichiometric model employed in metabolic flux analysis (MFA), and infer the metabolic network and possible regulatory mechanisms that dictate metabolic fluxes.

End-product synthesis profiles, and consequently H2 production, changed in response to several modifications of the culture conditions namely growth rate, growth phase, iron content in the medium, substrate availability and nutrient content, presence of soluble metabolites, pH and H2 concentration. The distribution of the fluxes at key metabolic nodes was found to be a function of thermodynamics as well as several physiological factors including genome content, growth and glycolytic rate, need for maintaining intracellular redox and pH homeostasis and only to some extent control of gene expression.

The synthesis of formate and ethanol, two products of the branched metabolism of C. celer, was found to compete with H2-evolving reactions for the disposal of reducing equivalents. Ethanol and formate production served as an alternative to H2 production for regulating the redox state when hydrogenases were inhibited. Moreover, formate synthesis was strictly linked to the growth rate suggesting its possible role in anabolic metabolism. Low growth rates, low substrate availability and nutrient content, high iron availability, presence of subinhibitory concentration of acetate and ethanol, slightly acidic pH and low H2 concentrations minimized the redirection of carbon and electron flow to ethanol and formate synthesis and thus favored efficient H2 production.

Kinetics of growth and H2 production were inhibited, albeit to different degrees, by high concentration of substrate and soluble end-products, whereas H2 yields remained marginally affected even in presence of considerable concentration of inhibitors. Acetate, the main soluble metabolite of the fermentation, inhibited H2 productivity due to the increasing ionic strength in the medium, rather than the uncoupling effect of the undissociated form. The critical substrate and salt concentration estimated for C. celer suggests that this organism is not particularly osmotolerant.

In conclusion, this study provides valuable information on the capabilities of C. celer to efficiently produce H2 as well as on its limitations through a comprehensive investigation of its fermentative and energy metabolism. C. celer showed a great metabolic flexibility that allows redistribution of fluxes at key metabolic nodes to simultaneously control redox state and efficiently harvest energy from substrate even under unfavorable conditions. Understanding how fermentation conditions control the metabolic fluxes contributes to expand the knowledge of the thermophilic dark fermentative H2 production process.