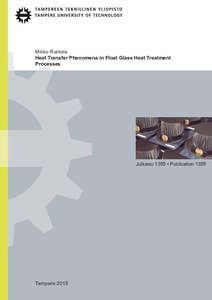 Glass tempering is a process in which the strength of float glass is improved with heat treatment. In a tempering furnace glass is on top of rotating ceramic rollers. In the process glass plates are heated with thermal radiation and forced convection up to about 640˚C and then cooled by air jets at a cooling rate depending on the glass thickness. The residual stress, i.e., tempering level depends on the cooling speed. In order to solve glass temperatures during a tempering process, the problem is to find solving method for radiation heat flux, convection heat transfer coefficients and contact heat transfer coefficient. The aim of the heat-soak process for tempered glass is to eliminate glasses at risk of spontaneous breakage. In the process glasses are heated up to 290˚C by hot air flowing in a channel between them. The problem is to find solving methods for glass and air temperatures which depend on the stream-wise coordinate and time.

A method for solving radiation heat flux from a tubular resistor to a plate under it was developed.

The radiative properties of clear and low emissivity coated soda-lime glass were shown and thermal radiation in a plate glass was described. A new method for solving net radiation heat transfer between a clear plate glass and diffuse surroundings was developed. In the method the radiation between glass volume elements is ignored and integration over hemisphere is covered by using the mean reflectivity of glass surface and the mean propagation angle at which radiation travels in glass. The use of the method is limited to glass temperatures below 700°C. The method was also adapted to coated glass. The method was used to show the effect of the radiation wavelength, glass thickness and low emissivity coating to plate glass radiation properties. The results of the method were compared against results in the literature. The method gave the same results. In the simplest version of the new method only the first internal reflection from glass-air interface was considered, and even then the accuracy was high.

The development of an air jet was introduced with equations. The momentum of the jet was solved experimentally and the results were compared against calculated ones. Local convection heat transfer coefficients on a flat surface under a sonic velocity air jet alike in glass tempering furnace were solved experimentally by using a constant heat flux plate. The effect of discharging pressure, orifice diameter and nozzle-to-plate distance to heat transfer was studied. The literature correlations were used and new experiments were made to research heat transfer under an impinging incompressible jet. It was observed that when the momentum of a jet and nozzle to plate distance are equal, then heat transfer is quite equal, even if the nozzle diameter and discharging pressure varied.

The methods for solving heat transfer between glass and air flowing in a narrow channel between glasses were presented for both turbulent and laminar flow. The method for solving heat transfer in a heat soak furnace was developed. In the heat soak furnace studied the flow was found to be turbulent, but also laminar flow could occur during the final stages of the heating due to increasing air temperature, i.e., decreasing Reynolds number. Theoretically predicted and measured temperatures were found to be in reasonable agreement. An extended method for furnace designer and operator for solving heat transfer in a heat soak furnace was developed with witch was found that in a very narrow channel the heating time increased dramatically because the air temperature at the end of such a channel was almost as low as glass temperature, i.e., heat from the air was already transferred to glass. The heating time also increased with the glass flow-wise length and thickness, although the total mass of the glass loading remained the same.