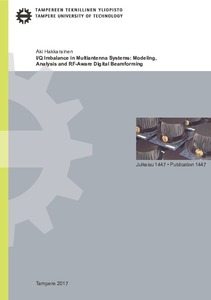 Wireless communications has experienced an unprecedented increase in data rates, numbers of active devices and selection of applications during recent years. However, this is expected to be just a start for future developments where a wireless connection is seen as a fundamental resource for almost any electrical device, no matter where and when it is operating. Since current radio technologies cannot provide such services with reasonable costs or even at all, a multitude of technological developments will be needed. One of the most important subjects, in addition to higher bandwidths and ﬂexible network functionalities, is the exploitation of multiple antennas in base stations (BSs) as well as in user equipment (UEs). That kind of multiantenna communications can boost the capacity of an individual UE-BS link through spatial antenna multiplexing and increase the quality as well as robustness of the link via antenna diversity. Multiantenna technologies provide improvements also on the network level through spatial UE multiplexing and sophisticated interference management. Additionally, multiple antennas can provide savings in terms of the dissipated power since transmission and reception can be steered more efficiently in space, and thus power leakage to other directions is decreased. However, several issues need to be considered in order to get multiantenna technologies widely spread. First, antennas and the associated transceiver chains are required to be simple and implementable with low costs. Second, size of the antennas and transceivers need to be minimized. Finally, power consumption of the system must be kept under control. The importance of these requirements is even emphasized when considering massive multiple-input multiple-output (MIMO) systems consisting of devices equipped with tens or even hundreds of antennas.

In this thesis, we consider multiantenna devices where the associated transceiver chains are implemented in such a way that the requirements above can be met. In particular, we focus on the direct-conversion transceiver principle which is seen as a promising radio architecture for multiantenna systems due to its low costs, small size, low power consumption and good ﬂexibility. Whereas these aspects are very promising, direct-conversion transceivers have also some disadvantages and are vulnerable to certain imperfections in the analog radio frequency (RF) electronics in particular. Since the effects of these imperfections usually get even worse when optimizing costs of the devices, the scope of the thesis is on the effects and mitigation of one of the most severe RF imperfection, namely in-phase/quadrature (I/Q) imbalance.

Contributions of the thesis can be split into two main themes. First of them is multiantenna narrowband beamforming under transmitter (TX) and receiver (RX) I/Q imbalances. We start by creating a model for the signals at the TX and RX, both under I/Q imbalances. Based on these models we derive analytical expressions for the antenna array radiation patterns and notice that I/Q imbalance distorts not only the signals but also the radiation characteristics of the array. After that, stemming from the nature of the distortion, we utilize widely-linear (WL) processing, where the signals and their complex conjugates are processed jointly, for the beamforming task under I/Q imbalance. Such WL processing with different kind of statistical and adaptive beamforming algorithms is ﬁnally shown to provide a ﬂexible operation as well as distortion-free signals and radiation patterns when being under various I/Q imbalance schemes.

The second theme extends the work to wideband systems utilizing orthogonal frequency-division multiplexing (OFDM)-based waveforms. The focus is on uplink communications and BS RX processing in a multiuser MIMO (MU-MIMO) scheme where spatial UE multiplexing is applied and further UE multiplexing takes place in frequency domain through the orthogonal frequency-division multiple access (OFDMA) principle. Moreover, we include the effects of external co-channel interference into our analysis in order to model the challenges in heterogeneous networks. We formulate a ﬂexible signal model for a generic uplink scheme where I/Q imbalance occurs on both TX and RX sides. Based on the model, we analyze the signal distortion in frequency domain and develop augmented RX processing methods which process signals at mirror subcarrier pairs jointly. Additionally, the proposed augmented methods are numerically shown to outperform corresponding per-subcarrier method in terms of the instantaneous signal-to-interference-and-noise ratio (SINR). Finally, we address some practical aspects and conclude that the augmented processing principle is a promising tool for RX processing in multiantenna wideband systems under I/Q imbalance.

The thesis provides important insight for development of future radio networks. In particular, the results can be used as such for implementing digital signal processing (DSP)-based RF impairment mitigation in real world transceivers. Moreover, the results can be used as a starting point for future research concerning, e.g., joint effects of multiple RF impairments and their mitigation in multiantenna systems. Overall, this thesis and the associated publications can help the communications society to reach the ambitious aim of ﬂexible, low-cost and high performance radio networks in the future.