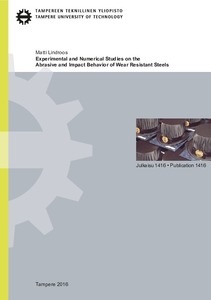 The demand for more wear resistant materials originates from modern applications of many industries, such as mining, automotive, aerospace and civil structures. The motivation to develop more efficient engineering structures and components can be seen beneﬁcial in both economically and environmentally. Lighter, higher strength and more wear resistant solutions can be attractive, for example because of savings in energy consumption (e.g., petrol and running costs), higher load bearing capability per material thickness/volume, and increased component lifespan. Steels remain still today very competitive materials for various wear applications because of their relatively good wear resistance in many conditions arising from their excellet mechanical properties, and because of the reasonable cost of manufacturing and processing of the components.

The steels exposed to high stress abrasive and impact wear conditions, for example in the equipment used in mining, are required to withstand heavy static and dynamic loadings for long periods of time. The evaluation of the performance of different steels in these type of conditions is often performed with experimental setups imitating the real loading conditions and material characterizations done afterwards, giving an insight into the material’s wear behavior in a particular tribosystem.

This work concentrates on the characterization of the mechanical behavior of wear resistant steels subjected to abrasive and impact loadings by hard particles. The mechanical behavior of the steels was ﬁrst characterized at a wide range of strain rates from 10−3 to 4000 s−1 . Although the increase in the ﬂow stress with the increasing the strain rate is well established, limited information is available of the behavior of these steels in the dynamic range. For example, the localization phenomena, such as adiabatic shear banding, have an important role in the failure behavior of the martensitic steels. On the other hand, the strain hardening behavior of austenitic manganese steels that evolves with strain and strain rate is affected largely by the twinning phenomenon. Two in-service cases including sample materials from a jaw crusher and from a cutting edge of a bucket loader were also characterized and analyzed. The observations made on the deformed microstructures of the laboratory and in-service samples formed the basis for the simulation approaches developed in this work.

High stress abrasion experiments were performed and further developed for the testing of wear resistant steels to study their capabilities to surface harden and to withstand wear. The results show that the surface hardening of the steels has a substantial effect on their wear rates. The common single scratch experiments, however, were shown to be insufficient to reveal all important aspects related for example to the surface hardening of the studied materials, and therefore different types of multi-scratch experiments were also applied. The characterization also showed that the martensitic steels generate two types of tribolayers depending on the prevailing contact conditions.

High velocity impact testing was conducted with a novel high velocity particle impactor device. The steels showed dependence on several external factors and conditions, such as impact energy, impact angle, and incident impulse. It was shown that the wear characteristics depended on the deformation mechanisms such as ploughing or cutting in addition to some more special mechanisms such as shear banding, which becomes active only at higher impact energies and/or higher strain rates. The strain hardening had both positive and negative effects on the material’s resistance against impacts depending on the loading conditions.

Two numerical crystal plasticity models were implemented to assist the development of the understanding of the deformation behavior at micro-scale. First a phenomenological model including dislocation slip and twinning was formulated to describe the micromechanical phenomena occurring in austenitic manganese steels. The model was found capable of representing the material behavior with a satisfactory accuracy in the studied deformation conditions, starting from the single crystal behavior and extending to the polycrystal level. A multi-scale method linking the application and microstructural scales was also demonstrated using a jaw crusher as an example. Implementation of a crystal plasticity method for BCC microstructure in the large deformation framework was also carried out. The model was extended to include a phenomenological description of the shear banding phenomenon in the microscale. The extension was demonstrated with simulations on single crystals with four different initial orientations. The results indicated that shear banding is a heavily orientation dependent phenomenon, but its relevance for the performance of polycrystalline microstructures still requires further examinations.