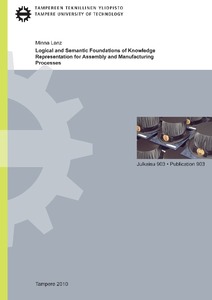 Partly due to the increase in global competition, the nature of manufacturing paradigms in Europe has been undergoing continuous change in recent decades. Pressures from the market are forcing companies to evolve into new entities of development and innovation. The trend of outsourcing to lower-wage countries, global market situation and geographically dispersed operations are imposing new challenges on manufacturing companies to become collaborative elements in the scheme of the supply chain. It is no new news to anyone that problems are arising when manufacturing experts are situated in Europe, design teams are spread around the globe and the operations are performed somewhere in Asia.
In order to keep up with the competitors the knowledge of the product itself, possible production facilities, and suitable processes has to be shared amongst the teams with ever-increasing speed.The emergence of highly computerised design and control systems is changing the fundamental assumptions of how product and production should be planned and controlled. Centralised control and decision-making systems based on hierarchical control structures and tightly-coupled system interfaces are giving way to globally distributed net- works that both enable and require localised and fast adaptation to changes.
There are two problems identified in this thesis that are closely related to the decision-making systems and knowledge share among those. The first problem is the amount of information stored inside companies information systems and its lack of meaning. Especially in the design of products and production systems the proprietary design models are converted from one model to another numerous times. Because of the lack of interoperability between systems, only the basic geometry is exchanged and the rest of the information may or may not be transferred manually to the new design. The discontinuous knowledge flow often results in several different and contradictory models of the same design. This also leads to a situation where the re-use of knowledge becomes a slightly hazardous task, since before the existing knowledge is used someone must verify that all of the disconnected pieces are valid.
The second problem emerges when the product knowledge is used as a set of requirements for the design of the production system. In order for the production to be launched as soon as possible, the production plan is usually verified with a decision support system. However, since decision support systems, either on the design level or the actual production control level, rely on the input knowledge, the lack of it naturally undermines the reliability of the decision making. This is one of the greatest technological barriers to the implementation of the greatly desired complex and adaptive production environment, since without the meaning of the models that are used the reasoning becomes almost impossible.
As several other challenges to implementing an integrated collaborative and dynamically adaptive production environment exist, only two challenges are taken into focus in this thesis. Both challenges have multiple facets, but they do share a common need: a formal rigorous knowledge representation. The approach introduced here aims to create a common knowledge representation between the product, process, and system domains. The aim is not to model everything that can be included in a knowledge representation but to model the common core components and their relations.
The approach in this thesis starts from a feature-based modelling and analysis method and utilises the detailed product knowledge as the core of the knowledge representation. The process-, and system-level knowledge is represented with the necessary detail and the amount of it that is needed that are suit- able for a given situation. The thesis introduces a knowledge representation (KR) for combining design information from several different sources into one reference architecture, which can be accessed via a common interface. The chosen approach is tested by means of three separate cases, which validate the KR from different perspectives. The first case study will evaluate the feasibility of utilising geometric and non-geometric features as the prerequisites for process modelling. The second case study evaluates the integrity and expressiveness of the KR by integrating the input from several commercial clients into one representation. The third case study evaluates the KR in a real production environment, where the KR will provide the knowledge for a holonic manufacturing system and save the events and device parameters into the history of the product that is realised after the operations are completed.